USA coach provides ‘get out of work’ note for Germany match

The head coach for USA’s World Cup football team is helping millions of employees around the world take time off in order to watch the upcoming Germany-USA match.

Jürgen Klinsmann has issued a “get out of work letter” for staff to fill in, which has been signed by him and posted to his Twitter account.

The letter can be printed out and filled in with personal details to request they be excused from work for the crucial match.

“I understand that this absence may reduce the productivity of your workplace, but I can assure you that it is for an important cause,” it reads.

It ends with a suggestion that the boss takes the day off as well, to “act like a good leader”.

Although the letter is intended to help those in time zones where the game will be played during the day, with the game airing at midnight tonight in this part of the world it’s possible your weary-eyed staff might have a go at filling out the provided letter. 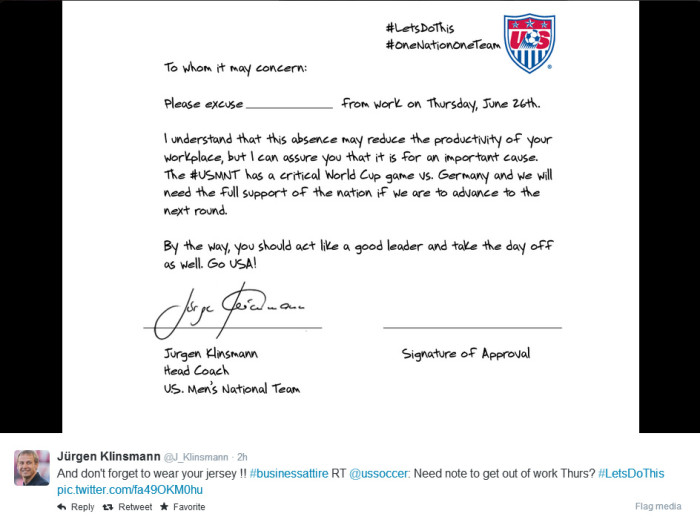 The official US soccer team website has also republished the note, stating that if the letter doesn’t work in getting you time off you can just “play hooky” instead.

Managing Ramadan in the workplace

Ever wonder what MTR staff actually do? Kids try to answer in new MTR video

The children of MTR staff have taken on a challenge and were asked in an online video to describe their parent’s job - and laughte..

The Futurist: Be open to all comers

The business case for employer-supported childcare

Did you know, absences due to sick leave can fall by 9% in the first nine months after a workplace crèche is opened?..

Are Singaporeans still unhappy in their jobs?

These new results may surprise you...

Eligible employers will receive letters from IRAS by 31 March 2018, informing them of the total WCS payouts they will be receiving..