I’m ashamed to admit it, but this is what my desk looks like this morning: 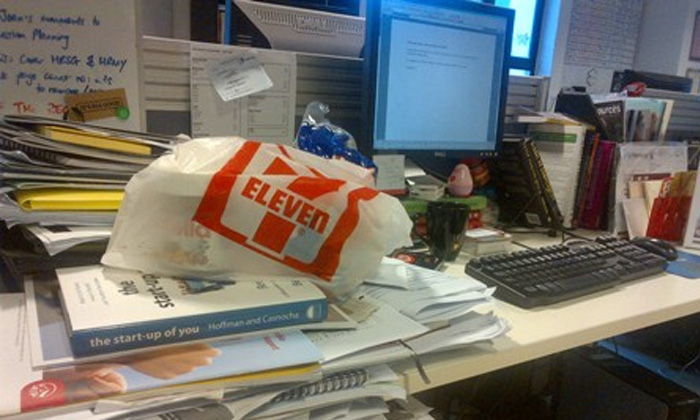 As a comparison, this is junior reporter Amos Seah’s desk: 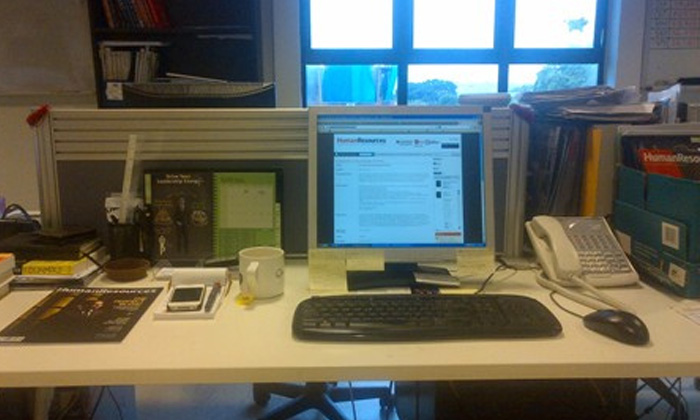 Yes, this is what my desk looks like most days and no, I haven’t quickly aligned things on Amos’ desk – this is really how organised he is.

I like to think of my desk as a place of ‘organised chaos’ (you might not be able to find anything, but I know where everything is) but apparently this isn’t a good way to work and it’s time I shaped up.

According to a 2012 Adecco survey, 57% of employees admit they judge coworkers with a messy desk. Half say they are “appalled” by how messy a colleagues’ office is.

And, according to a separate survey by Staples, more than half of 2000 Brits questioned said they feel an immediate rise in stress when faced with a messy desk each morning – yet only half of them tidy their desks at least once a month.

So what can we do to tidy up our workspaces?

Apparently, a small stack of papers that are to be dealt with immediately is alright to keep on your desk. But my version of old papers, press releases and notes (below) is not okay.

Keep food off your desk

This one I agree with (the bread on my desk was brought in this morning for my lunch – so no finger pointing!) but I know I’ve been guilty of leaving a used plate on my desk before. I know, it’s gross.

Allow yourselves a maximum of two personal photos

While I have almost no photos at my desk, senior journalist Sabrina Zolkifi has a lot (this is just a selection. She also has a map for her planned world domination on the other side of her desk.)

According to an article in Esquire, it’s considered “normal” to have photos at your desk to show you are human, but they recommend no more than two.

What do you think? I think it’s probably time I cleaned my desk more than once a month.

The 10 most needed workers in Singapore

10 jobs where you’ll fall in love at work

In an effort to keep themselves current, productive and profitable, companies are becoming more creative in coming up with ways to..

Like the rest of HR, the L&D function is rapidly evolving. Shalini Bhateja, director of talent management at Schneider Electric AP..

Companies are only maximising the potential of 5% of staff

Firms are not doing enough to ensure staff are engaged, have long tenures, and are in jobs aligned to their talent...

How to convince staff they are being paid fairly

Want to know what your team is worth at work? This new salary tool could help...