Will Trump’s victory have positive results for APAC workforce?

According to the newly released Harvey Nash Trump Effect on Asia survey, Trump’s victory could result in some positive outcomes for the workforce in the APAC region. 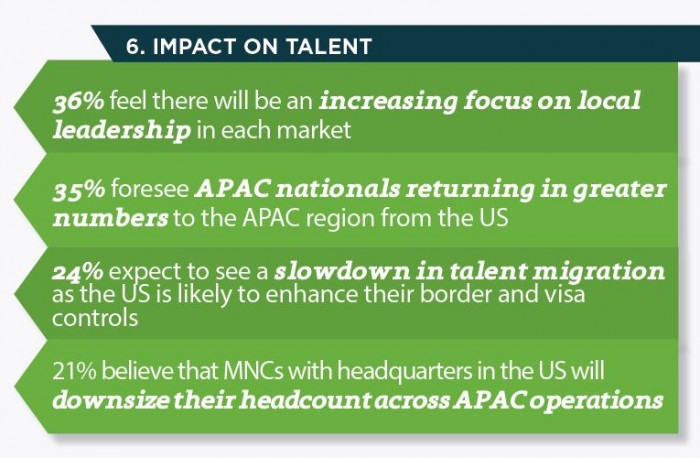 While this might be a positive outcome for the workforce, the majority of APAC leaders think the long-term impact could be negative for the region. The survey found that 71% of respondents believe that Trump’s victory has not yet affected their business; 15% report a negative impact, while 8% say it has had a positive impact on business.

Additionally, the majority of APAC business leaders expressed concern about the lasting impact of a Trump presidency. 29% expect a long-term negative impact on APAC business profits, while 19% are assessing their existing trade deals with the US, and 7% have cut budgets as a result of Trump’s victory.

The survey also revealed that businesses in the region were mainly unprepared for the election result. 65% had no plan in place for a Trump victory, 19% had prepared a business contingency plan, and less than a tenth (9%) of respondents were fully prepared, with both a response and plan to deal with this outcome.

Looking to the future, 59% of APAC business leaders predict that trade and tariff negotiations will be affected by the Trump presidency, 49% foresee market instability, and 30% anticipate an economic slowdown in the region.

Nick Marsh, MD, Harvey Nash Executive Search APAC said: “Trump’s victory came as a surprise to many business leaders in the region and came at the end of year which saw increased levels of uncertainty across global markets. Those in the region must now look at how to steady the ship and put in place plans to deal with these anticipated changes. The good news is that so far it’s business as usual for the majority of APAC businesses and that those in the region stand to benefit from a wave of returning local talent.”

3 tips to help you survive an open plan office

As the evidence continues to stack up against open plan offices, what can you do to ensure you’re making the office environment wo..

Additionally, SMRT aims to recruit up to 2,500 more staff over the next three to five years. ..

The talent shortage has forced companies to become more creative in their hiring strategies. Four HR heads weigh in on mastering t..

Are your job descriptions clear enough for candidates?

While about three in four hiring managers think their position descriptions are clear, only 36% of candidates agree...

We’ve all experienced that heart-stopping moment after making a mistake. Recruitment specialist Greg Brooks shares his most cringe..