Everybody who travels knows how much jet lag sucks. You don’t sleep on the plane, you panic about how the lack of sleep will affect you at work the following day, then when you finally do hit the hay at home (or in your hotel room) you inevitably wake up two hours later completely alert, watching TV and eating a fully cooked meal at 3am.

It’s not pleasant, but it’s something all mobile employees and frequent flyers deal with.

Having just returned from a trip to the UK, I’m currently feeling the effects of jet lag. These are expected – the grogginess, the tired eyes, the inability to speak properly and the ever-present threat of falling asleep at my desk – but what I didn’t expect was to discover all this is actually making me stupid.

That’s right – you are actually made more stupid by simply leaving your internal clock in another time zone.

According to a study by the University of California and presented at the Society of Neuroscience, the more often you are jet lagged, the more your poor brain suffers for it – and I’m afraid the damage might be permanent.

In this study, researchers subjected a group of hamsters to six hour time shifts (the same as a flight between Paris to New York, for example) for a couple of weeks. After this, the poor hamsters had trouble learning new things and couldn’t do things the other hamsters could.

While this was to be expected due to tiredness, what shocked researchers was that even a month after re-setting their internal clocks, the hamsters were still making mistakes and basically being, well, stupid hamsters.

The constant change of their body clocks actually changed their brains. The tired hamsters had only 50% of the neurons the alert hamsters had, which had seemingly affected their memory and ability to learn forever – even when they got the same amount of sleep as the other hamsters. 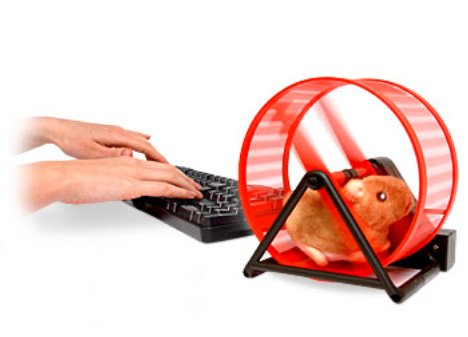 This is you when tired – not going anywhere.

Scary? Yes. An effect of jet lag that affects hamsters only? Sadly, no.

Other studies have found similar results in people with jobs that require them to travel a lot, changing time zones. For example, flight attendants have been found to suffer severe memory loss – reported by 67.47% of attendants studied at Bharathiar University.

While it’s not really clear to scientists yet why jet lag so severely affects these cognitive functions, at least now you might understand why some of your mobile employees tend to act like hamsters on a wheel for a while after they return from trips.

Now, if anyone has any tips to help me get over my jet lag (well, as much as I can – if I’m going to remain stupid for a month after this trip I’d at least like some tips as to how to hide it at work) please send them over.

(Disclosure: This article was written under the extreme influence of jet lag. I take no responsibility for any spelling mistakes or poor grammar. In fact, I blame the hamsters.)

It's all fun and games

5 ways to nail your second interview

Making it to a second interview is your chance to stand head and shoulders above the competition, here's how to do it...

VOI: Understanding the business outcomes of your wellbeing programmes

While we all agree investing in your people is important, business leaders demand quantifiable results on their investment...

Is your office a pressure cooker for cheating?

Are you using the wrong tactics to motivate your employees? High-pressure could be causing them to cheat...

The war between human resources and business leaders is evident, but it's time HR leaders start asking themselves what they really..