Singapore is the city with Asia’s best quality of living, according to Mercer’s 19th annual Quality of Living survey. The island nation topped the city infrastructure ranking, that assesses supply of electricity, drinking water, telephone and mail services, and public transportation as well as traffic congestion and the range of international flights available from local airports. 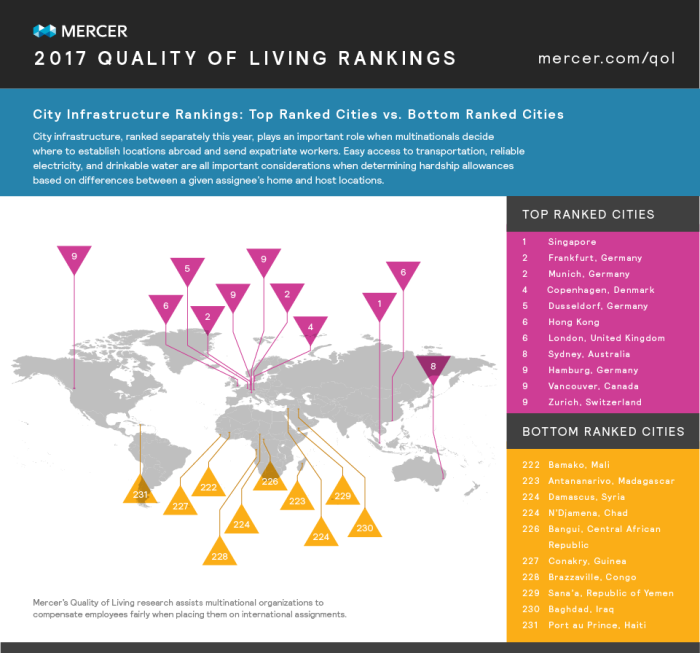 Here’s how Asian cities fare in the global rankings:

Japan dominates the top five list for Asia, while Hong Kong makes an appearance just after Singapore and Japan, at rank 71. Malaysia’s Kuala Lumpur and Johor Bahru feature at 86 and 103 respectively.

Mario Ferraro, global mobility leader for Asia, Middle East and Africa (AMEA) at Mercer, noted Asia Pacific continues to be an attractive location for expats looking to take short or long-term work assignments and to invest in their career.

He added: “Given the huge disparity in quality of living standards across the region and the rapid pace of change, more than ever employers need to be well-equipped to understand the local environment, infrastructure and the differences between locations, when relocating and hiring staff in the region.” 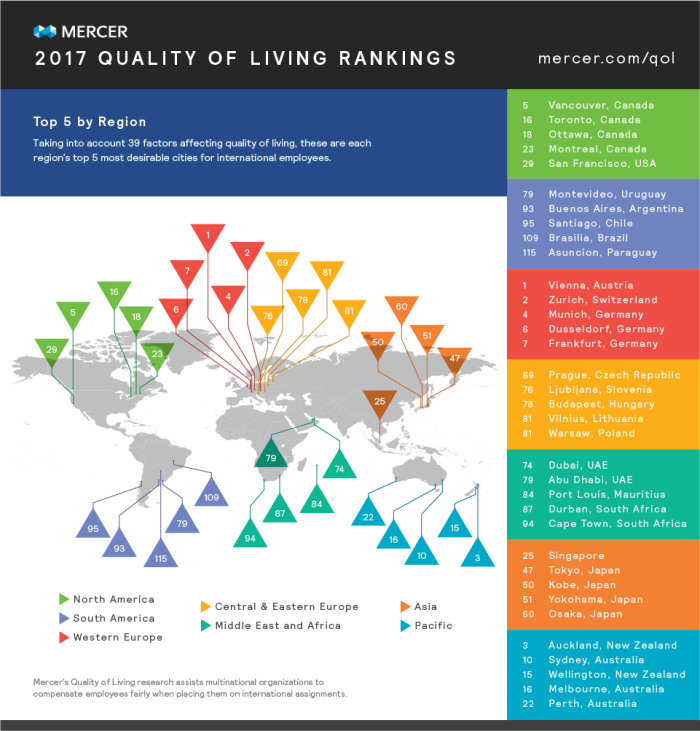 The report describes Asia Pacific as a region with great disparities in quality of living. In 25th place, Singapore remains the highest ranking city in Asia and Dushanbe (215) in Tajikistan is the lowest. In addition, Singapore was ranked as the top location worldwide in terms of infrastructure, while Dhaka was ranked last (214).

New Zealand and Australia continue to rank highly in quality of living: Auckland (3), Sydney (10), Wellington (15), and Melbourne (16) all remain in the top 20. However, when ranked for infrastructure, only Sydney (8) makes the top ten, with Perth (32), Melbourne (34), and Brisbane (37) also ranking well for infrastructure.

Quality of living in Europe

Heading the global charts are European cities – Vienna in pole position, followed by Zurich. Auckland, Vancouver and Sydney, make an appearance in the top 10, however the rest of the list features German, Swiss, and Danish cities.

Thus, despite increased political and financial volatility in Europe, these remain attractive destinations for expanding business operations and sending expatriates on assignment. 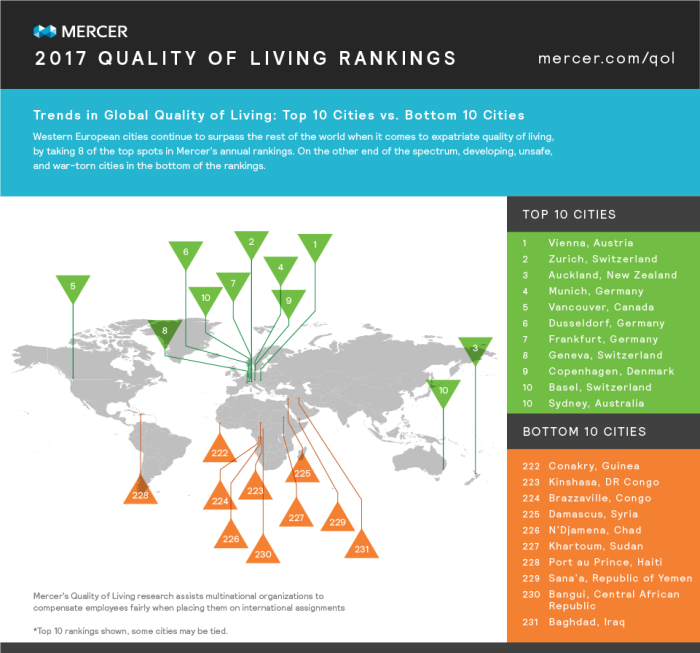 Boss ordered to compensate worker for texting him after office hours

Staff want their bosses to get fired in the New Year

Find out what else would make your employees happier in 2015, if they had things their way. ..

The best jobs for HR professionals, in case they are fired

The skills and instincts of a HR professional have proven to be very valuable in today's job market, here's what you could try. ..

As part of its consolidation plan, the group is offering this non-obligatory scheme to cut around 10% of its workforce. ..

These revamped career matching services under WSG and NTUC are complimentary for employers and job-seekers alike. ..