Thailand, Australia and Singapore have the most satisfied staff in APAC

Singapore might have once been home to the second most unhappy employees in the world, but looks like things sure have changed.

According to Universum’s Global Workforce Happiness Index, Singapore has the third most satisfied workforce in Asia Pacific.

Within the 11 markets surveyed in the region, Thailand was titled as the nation with the happiest workforce, followed by Australia.

Along with Singapore, they were the only markets within the region to sit above the global average satisfaction level.

Of these countries, the least satisfied workforce came from Japan, followed by India.

Interestingly, the report found having a satisfied workforce did not necessarily dictate employees would recommend their employers to a friend.

When asked whether they would recommend their employer to a friend, the happy folk from Australia were the only within Asia Pacific to be more inclined to make that recommendation.

Hong Kong employers are the least likely to be recommended by their employees, followed by those from Japan.

“This points to possible cultural challenges for any employers keen to boost employee advocacy in these markets,” wrote the press release.

Interestingly, despite having the least satisfied workers, Japanese employees were found to be the most loyal.

The survey arranged the countries into a happiness quadrant – stranded, seeker, restless and fulfilled.

Stranded employees were classified as those dissatisfied in their current jobs, but are unmotivated or unwilling to make a change.

ALSO READ:
Are Singaporeans really happy at work?
Are these the most disengaged employees ever?

“The Global Workforce Happiness Index reinforces what Singapore’s Ministry of Manpower is saying about their not being enough job seekers in Singapore, despite the abundance of opportunities,” Mike Parsons, marketing director APAC at Universum said.

“Those in the category ‘stranded’ are those who are dissatisfied in their current jobs but who are generally unmotivated or unwilling to make a change. If MoM was reporting an high number of job seekers, you would see Singapore sitting lower down in this chart,”

He added there could be many factors at play for this, “but one likely reason for this aversion to change could be due to the perceived difference between a current employer and other external opportunities available, with there not being enough perceived gain to warrant risking a move.  This is congruent with Singapore’s developed and regulated, thus quite even, employment landscape”.

The survey also found that the main reasons employees want to seek a new employer were found to be compensation and benefits, better opportunities for advancement and increased learning opportunities.

Additionally, by industry, it was found that employees in the legal services industry were the happiest, followed by aerospace & defence, educational & scientific institutions, insurance, and technology, hardware & equipment.

On the flip side, employees in the healthcare services industry were found to be the least happy, followed by those in media & advertising, tourism, engineering & manufacturing, and retail. 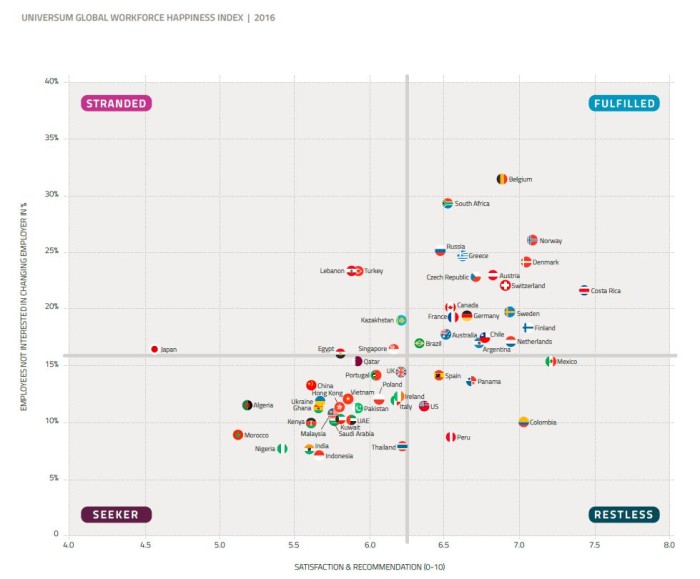 After two airline tragedies in just four months, will Jauhari Yahya finally be forced to resign? ..

Should Friday be declared a rest day in Malaysia?

A minister in Prime Minister’s Department feels that Friday prayers should not be the reason to declare a rest day...

Smokers may have a tougher time finding a job, earn less money

Smoking may cost more than the money smokers spend on cigarettes - smokers earn an average of $5 less an hour than non smokers...

Check out the best firms which will allow you to get the talented and result-driven mid-level staff you've always dreamed of hirin..

L&D experts are also set to be popular this year, as local firms focus on developing high potential talent into management positio..