Sitting all day causes about 433,000 deaths every year

Excessive sitting (more than three hours a day) is responsible for 3.8% of deaths every year, i.e. 433,000 deaths annually, in a study of 54 countries, including nations in Southeast Asia.

The researched countries represented 25% of the global adult population, among which 4% was Southeast Asian, pointing to an average daily sitting time of 4.7 hours. This shot up to 6.2 hours a day in Western Pacific countries, while it dipped to 4.2 hours a day in American countries.

A number of recent studies have quantified the risks associated with prolonged sitting – for instance, a meta-analysis concluded that for each one-hour increment in sitting time, mortality risk increases by 5%. 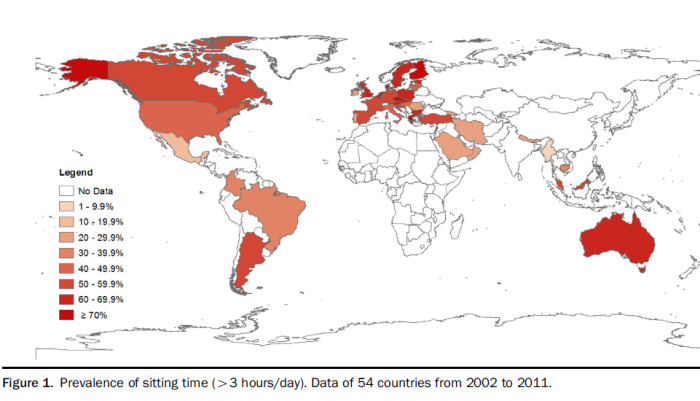 On the flipside, the researchers found that even modest reductions, such as a 10% reduction in the mean sitting time, or 30 minutes, could have an instant impact in mortality (0.6%) in the 54 countries.

Why should employers care about these hazards of a sedentary lifestyle? Share your views with us in the comments below.

In fact, Zuckerberg said he would be taking advantage of Facebook's option to take leaves in parts. ..

How your name affects your credibility

Does having a hard to pronounce name really affect a candidates' chance of landing a job? Apparently, yes. ..

Global CEO role for Maxus moves out of Asia

GroupM announces UK-based Lindsay Pattison will take over the top role at Maxus from Vikram Sakhuja. ..

Why your employees are walking out the door

Companies might want to start reassessing their talent priorities as 80% of professionals are leaving the company because of this ..

Errant bosses can now be arrested on the spot

Starting today, Ministry of Manpower officers have been granted the power to arrest employers who don't pay their staff. Read on f..