“This score supports what we’re seeing on the ground, namely that wages in high-skill industries are rising much quicker than those in low-skill industries relative to the past,” said Lynne Roeder, managing director of Hays in Singapore.

She pointed to specific skill shortages in sectors like engineering and technology, where employers in such high-skill industries are competing for the top talent.

Comparatively, Hong Kong received a score of 6.2 on the same indicator.

ALSO READ: Would you offer a higher salary to an engineering graduate?

Apart from wages, the island nation also faces pressure in the indicator of ‘talent mismatch’ with a high score of 6.0, which implies local talent often does not have the skills wanted by employers, leading to both higher rates of vacancies and unemployment.

Singapore also received a high score of 5.5 when it came to ‘labour market participation’, suggesting that most of the country’s labour force has been utilised and can’t be increased in great numbers.

Other than skill shortages, another aspect where the country’s labour market came under pressure was in ‘wage pressure in high-skill occupations’ (5.9).

This high demand but short supply of talent for highly-skilled occupations is leading to wage pressure for suitable candidates.

ALSO READ:
Singapore has the highest proportion of high-skilled employment in APAC
Expect salaries in Singapore to increase by 4.1% this year

Indeed, when it came to overall wage pressure, Singapore’s score saw a dramatic rise, from 1.3 in 2014 to 5.8 this year.

Roeder explained this huge increase means wages rise much faster than historically seen, indicative of an overall tightness in the labour market, especially in the talent war for highly-skilled professionals.

She added: “Singapore’s standing as a regional hub for multinational corporations and the sheer number of construction and infrastructure projects bolsters a highly active recruitment market. But Singapore faces a significant talent gap thanks to growing technical skill shortages.”

She advised employers to use a range of innovative attraction strategies, not just salary increases, to keep recruitment plans intact. 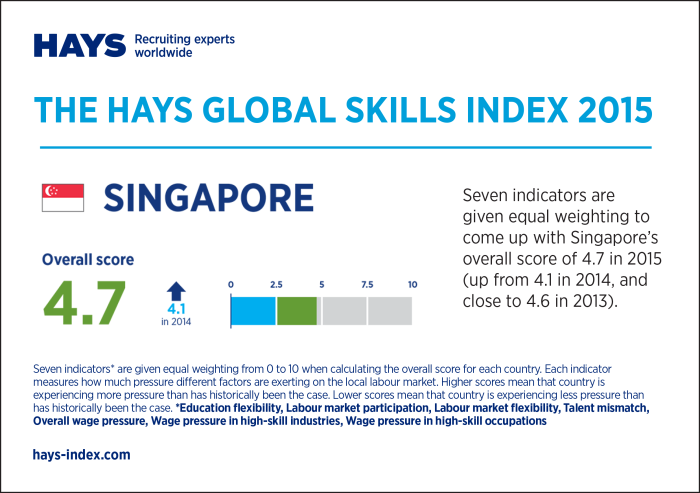 Tasks employees can’t tackle before their first cup of coffee

What Hong Kong's labour force will look like in 2046

Nurses were one of the toughest roles to be filled by locals last year. Then how did KKH build a stable and engaged workforce?..

Singapore is the world’s 31st most expensive city

Singapore surpasses all Australian cities for the first time since 2009 in the latest global list of most expensive locations for ..

As Starbucks continues to expand within the APAC region, the coffee giant has announced plans to double its staff strength in the ..

Would you trial a six-hour work day?

In a controversial economic experiment, one country is slashing work hours from 9am to 3pm, while keeping staff on full pay...