Lunar New Year is typically a time where people spend time getting together with their family and friends, eating festive foods, giving and receiving red packets. Celebrating the festivities doesn’t come easy on the pocket – with Singaporeans intending to spend an average of more than S$2k this year.

According to the annual United Overseas Bank (UOB) Lunar New Year Survey, this year overall respondents indicated that they intend to spend an average of $2,503 each. However, compared to last year’s budget of $2,805, there was a drop in spending of close to 11%.

The lower overall budget may be a reflection of consumer sentiment, with four in five respondents expecting the economic situation in 2017 to be the same or worse than in 2016.

UOB economist Francis Tan said that given lower wage growth last year and the expectation of slower economic growth this year, tighter budgets for the festive period are not unexpected.

Despite the lower budgets, Tan said the desire for the respondents to treat their families as they did last year does not appear to have been hampered by higher food prices caused by poor weather conditions which have affected food supply. The weakening Singapore dollar has also made it more costly to import food.

Nevertheless, Singaporeans are not tightening their belts for food this Lunar New Year, the survey noted. Of their average Lunar New Year budget of $2,503, the respondents said that $521 will be spent on food – an increase of 7% over last year. With almost half of this food budget going towards celebrating a reunion dinner with loved ones.

“Food plays an important part in the way Singaporean families bond with one another and festive dining would definitely be higher in the pecking order during Lunar New Year celebrations. It is not surprising to see that people are continuing to focus on food during the festive period,” Tan said.

Another significant part of Lunar New Year festivities is the tradition of giving red packets, making up almost a quarter of the total budget (24%).

The survey revealed that parents and parents-in-laws can expect to receive the highest amounts in their red packets this year, at $358 and $264 respectively.

“Although Singaporeans are planning to spend less this Lunar New Year, it is heartening to see that the majority want to uphold traditions such as reunion dinners and the giving of red packets,” Tan said. 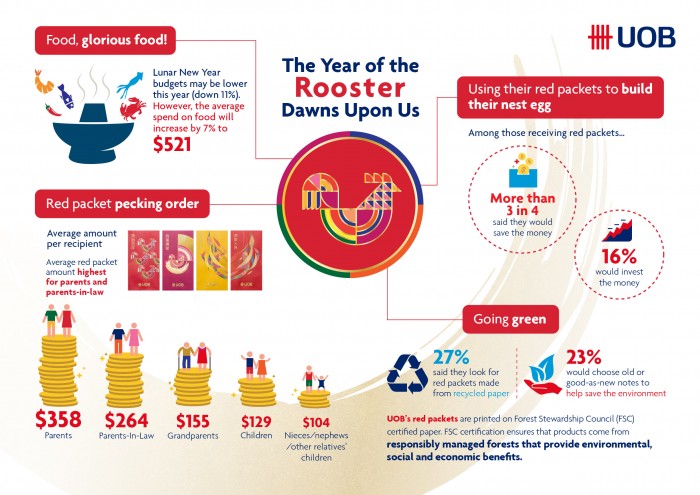 Will Trump’s victory have positive results for APAC workforce?

Are you guilty of this annoying habit at work?

More than one-third of CFOs cited lacking attention to detail or sloppy work as the most annoying behaviour by co-workers...

Under this S$250,000 initiative, staff will also get safety gear and accessories such as helmets and reflective shirts...

Malaysian bosses have a direct impact on job satisfaction

Employees don’t leave companies, they leave managers. New research has shown this might be exactly why Malaysian workers keep look..