Singaporeans clocking in an average of 45.6 hours at work every week

The average working week in Hong Kong stands at 47 hours – but Singaporeans seem set to match the competition, with a weekly average of 45.6 paid hours.

The statistics, in the Ministry of Manpower’s (MOM) labour report for Q3 2015, showed this figure, and the average paid overtime hours (3.4 hours) per employee remained unchanged in September 2015 for the second consecutive quarter.

Workers in the construction and manufacturing sector work the most – clocking in 52.1 and 49.3 hours respectively, driven by more overtime hours (7.7 and 6.4 respectively).

On the other end of the spectrum, services sector staff worked much fewer hours at 43.1.

Data on unemployment and layoffs

Among the other key findings of the report, unemployment rose among residents (3%) and citizens (3.1%) for the second consecutive quarter.

In the same vein, layoffs rose over the quarter in all three sectors of services (61%), manufacturing (26%) and construction (12%).

Professionals, managers, executives & technicians (PMETs) represent the large majority of layoffs, forming seven in ten of residents laid off in the third quarter of 2015.

The remaining share was almost evenly divided by clerical, sales & service workers (12%) and production and transport operators, and cleaners and labourers (10%).

Among the residents laid off, the rate of re-entry into employment within six months of redundancy was broadly unchanged – 55% of those made redundant in Q2 2015 secured employment by September 2015.

As a result, the seasonally adjusted ratio of job vacancies to unemployed persons declined to 116 openings per 100 job seekers in September 2015 from 121 in June 2015, comparable to June 2013.

“Business leaders in Singapore are increasingly looking to align job scopes and leverage technology to reduce labour costs. This focus is driven by a growing focus on workforce productivity and efficiency.”

She added: “To remain relevant in today’s changing world of work where technology is beginning to dominate most roles, employees need to constantly update their skills. They can do so by going on career training programmes or signing up for external courses”. 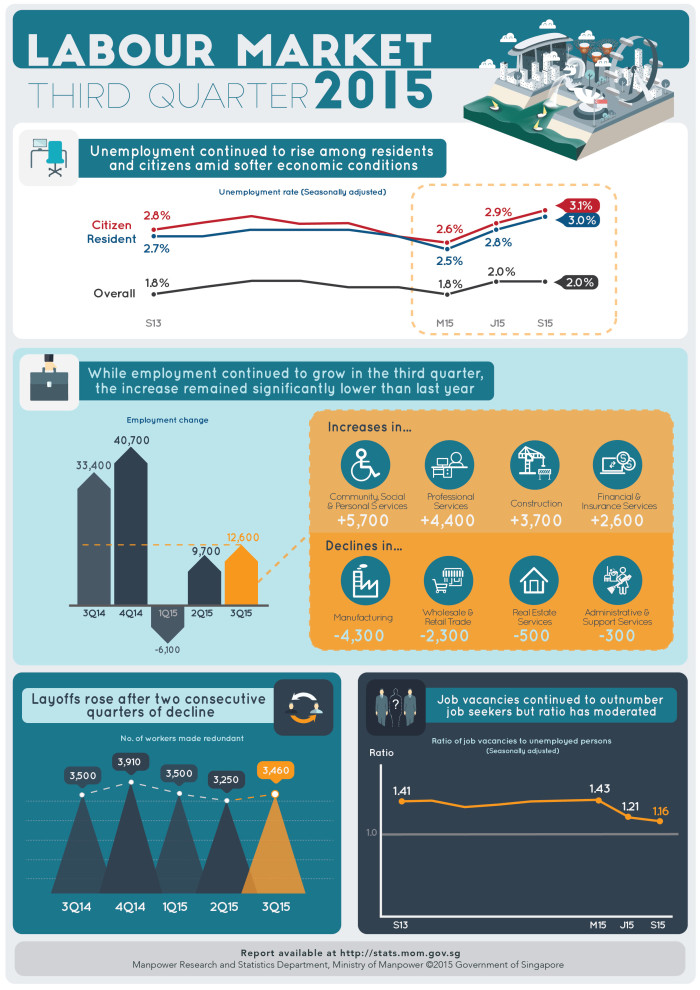 Bosses may be jailed if expats submit forged documents in Malaysia

73% of Hong Kong staff set to receive bonuses this year

A quick fix to employee benefit costs in Malaysia

With employers in Asia experiencing benefits programme cost increases as high as 45%, here are ideas to optimise your spend...

Who owns duty of care policies for assignees: mobility, security or HR?

More than half house duty of care under the internal corporate security team, while 23% hold the mobility team responsible...

Go behind the walls of prison and discover what it's really like to work as a deputy superintendent at the Singapore Prison Servic..

An exclusive peek into what 50 of Asia's senior HR leaders have discussed in the past 3 days, set in Phuket for the third annual S..

The federation thinks that it will escalate operating costs and affect businesses amid the economic slowdown...

Median monthly household income for Malaysians has increased to RM5,228

Median monthly household income for Malaysians has increased to RM5,228