Singaporeans can expect pay increases of 4% in 2016

Good news for Singaporean employees: Salary increases for locals are expected to continue in 2016.

According to the latest salary trends survey by ECA, Singapore’s employees will see their salaries increase by an average of 4% again in 2016.

“The Singapore economy will clearly be affected by the slowdown in emerging markets, owing to its relationship with major economies in the Asean region and China,” said Lee Quane, regional director – Asia, ECA International.

“However, salaries will increase this year and next year at the same rate as in recent years when economic growth has been more stable. This suggests that the rates of salary increase that we see in 2015 and 2016 are what companies consider necessary to retain their human capital.”

Among the 20 countries surveyed in Asia, Singapore was ranked 15th in terms of nominal wage increase.

Hong Kong emerged at 14th place with an increase of 4.5%.

However, once inflation is taken into account, Singapore moves up to 12th place while Hong Kong drops to 15th place – with an increase of 1.5%.

ALSO READ:
Why paying staff at least US$70,000 a year is a great idea
Salaries for HR professionals in Malaysia set to rise

Across the region, employees in Pakistan can expect to receive the biggest gains in salary (10.5%).

However, once inflation is taken into account, it is overtaken by both Vietnam and China, falling to third place regionally.

On the other hand, employees in Japan are expected to see the lowest wage increase in the region. 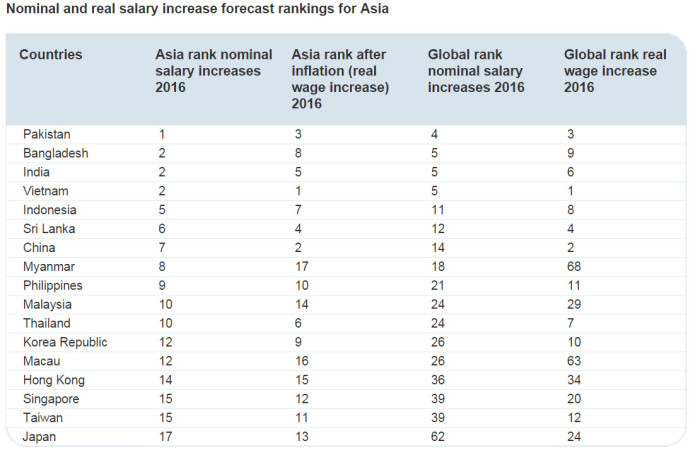 Companies cannot expect the boost in local hiring to continue, and must look for less labour-intensive alternatives, warns MOM. ..

HR practices from a company that enables employees (aka, partners) to study, work abroad, or simply, be the best in all things cof..

Khazanah refutes recent media reports and stresses both foreign and Malaysian leaders are being considered for the role. ..

The firm introduced various programmes to turn around the perception and culture of the agency among the Millennial workforce...

Malaysian staff are the least confident in the region that their dream job will remain relevant, thanks to technology. ..