Singapore is the world’s 7th most innovative nation

Singapore has once again made its mark as a world-class city by being heralded the title of the seventh most innovative country in the world – and the most innovative in South East Asia and Oceania.

That was according to the Global Innovation Index 2015 (GII 2015), an annual survey published by Cornell University, INSEAD and the World Intellectual Property Organisation (WIPO).

Following Singapore, were Hong Kong and Republic of Korea to round up the region’s top three.

The GII measured innovation in 141 economies around the world, based on criteria such as institutions, human capital and research, infrastructure, credit, investment, linkages, the creation, absorption, diffusion of knowledge, and creative outputs.

ALSO READ: Singapore is world’s number one for ready access to internet 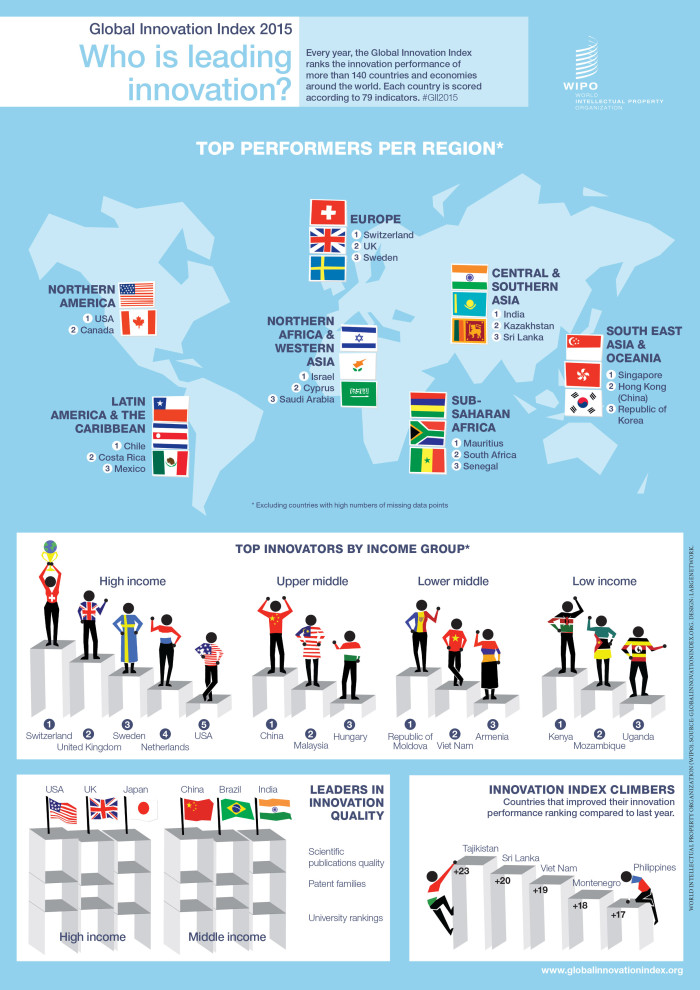 As a result, Singapore was also ranked the most innovative nation among the Southeast Asia and Oceania region, followed by Hong Kong (China).

The report added the region’s performance was not only also boosted by China (29th) and Malaysia (32nd), but also positive developments in Vietnam (52nd), Philippines (83rd) and Cambodia (91st).

“At the same time, it (Singapore) shows a somewhat downward trajectory in outputs. A relatively high input index in comparison to its output index negatively influences Singapore’s ranking in the innovation efficiency ratio,” the GII press release stated.

The survey defined innovation outputs as the results of innovative activities within the economy, inclusive of knowledge, and technology and creative outputs.

Indeed, when it came to the innovation output indicators, Singapore ranked lowly.

It was ranked 59th in world for the growth rate of GDP per person engaged and 90th for communications, computer and information services exports.

“Each nation must find the right mix of policies to mobilise the innate innovative and creative potential in their economies,” said director general Francis Gurry, WIPO director.

Williams and Randstad partner to spot Formula One engineering talent

Want to get rid of your boss? Häagen-Dazs has a way

Pamela Teo will oversee the firm's talent management function throughout Asia Pacific, and will be based in Singapore...

It looks like the opportunity to learn new skills is fast becoming the new currency for retaining and attracting talent...

5 types of people who never succeed at work

Every workplace has people who never achieve anything of significance, or make an impact on the business. Are you one of them? ..

PageUp was a clear winner at the HR Vendors of the Year Awards 2015, clinching gold awards in both Singapore and Malaysia...