Singapore has the third lowest hiring outlook in APAC

Despite being relatively stable compared to the previous quarter, hiring rates in Singapore are expected to be lower as compared to other countries in Asia Pacific in the next three months (Q4 2015).

According to the latest Manpower Employment Outlook Survey, of the 665 local employers surveyed, 16% forecast an increase in headcount, 3% expect a decrease, and 69% don’t foresee any changes in staffing levels in the last quarter of this year.

After adjustment to allow for seasonal variation, hiring in Singapore is expected to increase by 12% this quarter, remaining steady from the previous quarter (+13%).

Employers in all seven industries monitored expected an increase in headcount in Q4, with the maximum expected in the finance, insurance & real estate sector (+18%) as well as the public administration & education sector (+18%). 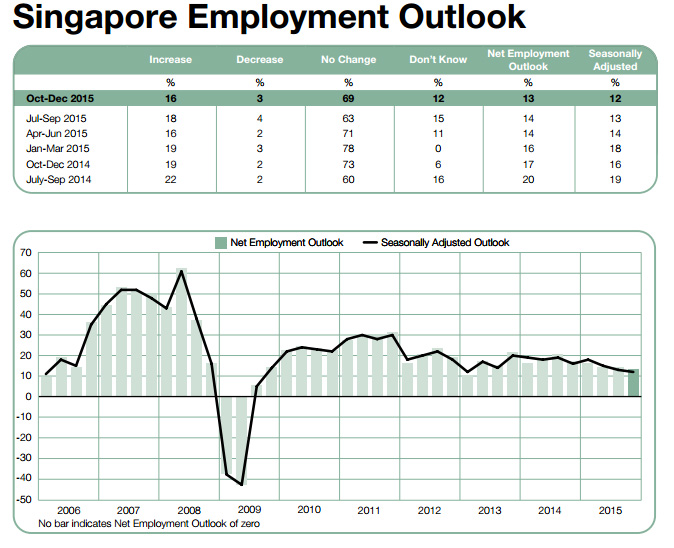 On the flip-side, the wholesale trade & retail trade sector reported the weakest outlook for the second consecutive quarter, at +4%. Nevertheless, some additional hiring is expected.

“The year end is traditionally a busy period for retailers who have to cope with more demand from shoppers. So, more hiring of contingent workers in particular can be expected,” Linda Teo, country manager of ManpowerGroup Singapore said.

Singapore tied with New Zealand as the countries with the third lowest hiring outlook in the region.

The lowest hiring outlook in the region belonged to China, with a seasonally adjusted outlook of +5% – the lowest it has seen since Q3 2009. This was followed by Australia with an outlook of +7%.

On the other hand, the countries recording the highest seasonally adjusted employment outlook were India (+41%), Taiwan (+36%) and Japan (+25%), while Hong Kong was in the middle with an outlook of +15%.

“The year-on-year outlook decline, from +16% to +12%, indicates that while employers expect the hiring pace to remain positive, uncertainties such as weak global demand for exports and China’s sluggish economy, have dampened real hiring intentions in our trade-dependent economy,” Teo explained.

The three types of bosses no employee wants

Only 10% of Singaporeans claim to be stress-free

For every local professional who is stress-free and happy, there are 2.5 people who feel overwhelmed and stressed...

While tech giants like Facebook and Google score full marks for their LGBT policies, expert worry if policies translate to action...

Grab acquires Uber: What this means for the 500+ employees involved

Employees across all Southeast Asian locations were given the full day to process the news, an Uber spokesperson told us...

The centre raises the school's capacity by 50%, helping it meet the growing demand for management and leadership education in Asia..

The 5 most annoying types of colleagues at work

Male staff have proven to be more irritating than females - notably for poking coworkers on social media and for being chatterboxe..