Singapore is the most expensive city in the world

Singapore is now officially the most expensive city to live in, climbing four spots on The Economist Intelligence Unit’s Worldwide Cost of Living Survey, beating Paris, Oslo and Zurich.

According to the report, Singapore’s strong currency, which has seen a 40% appreciation over the past decade, and high levels of inflation are some of the factors that helped the city knock Tokyo down from first place to sixth.

Thanks to the expensive certificates of entitlement for vehicles, Singapore’s transportation costs are three times that in New York. Additionally, the lack of natural resources here, and hence dependence on other countries for supplies such as energy and water, have driven up prices for utilities.

But Asia isn’t just home to some of the most expensive cities in the world.

Mumbai would be an ideal location for those looking for more value for money, as it was found to be the least expensive city in the world with an index of 39. Coming in second least expensive was Karachi (40), followed by New Delhi (43), Damascus (44) and Kathmandu (44) rounding up the top five. 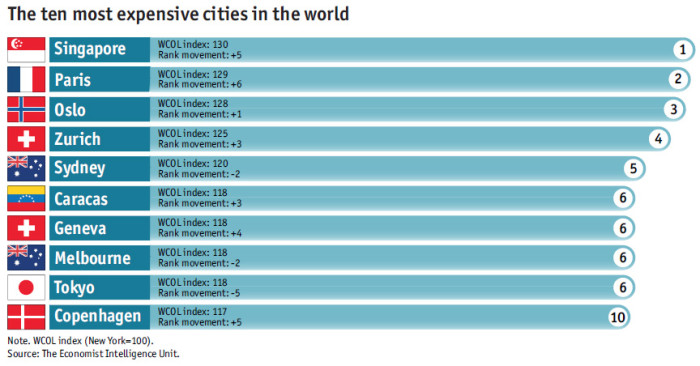 Is your company at risk?

The one thing you need to increase job satisfaction

Female board representation, the only way is up

Greater value should be placed on maximising the potential of female leadership in Singapore to improve productivity towards SG100..

With CEOs ready to take a 12% pay cut to join well-known firms, why is HR not more focused on building employer brands?..

It’s all fun and games

The rebranding will not affect ongoing businesses, core activities, or their office location and contact numbers. ..

Top 10 CEOs with the best and worst reputations

Making a name for yourself is a tricky business, and reputation is everything in the business world...