Singapore is Asia’s number one in pension systems

Singapore ranked number one amongst Asian countries for a third consecutive year in the Global Pension Index, that was topped globally by Denmark for a fourth consecutive year.

Despite Singapore coming out on top in Asia, a slight drop in the index value of the nation’s retirement savings system saw it slip from a B grade last year to a C+ grade overall.

Denmark and Netherlands are the only countries to achieve an A grade in the history of the index.

“While Singapore’s retirement income system remains amongst the best in Asia, we are not the best globally. Improvement will be influenced by the legislative and regulatory environment,” said Neil Narale, Asia retirement leader for Mercer.

Narale noted that Singapore is on the right track – owing to improvements to CPF announced in 2016, including increasing the wage limit, contributions and guaranteed investment returns for older members and introduction of the Silver Support Scheme to help low income retirees.

Now in its seventh year, the MMGPI is published by the Australian Centre for Financial Studies in conjunction with Mercer and funded by the Victorian State Government.

This year’s study saw Denmark holding on to the global top spot with a score of 81.7.

ALSO READ: How does Singapore’s CPF rank on the global pension stage? 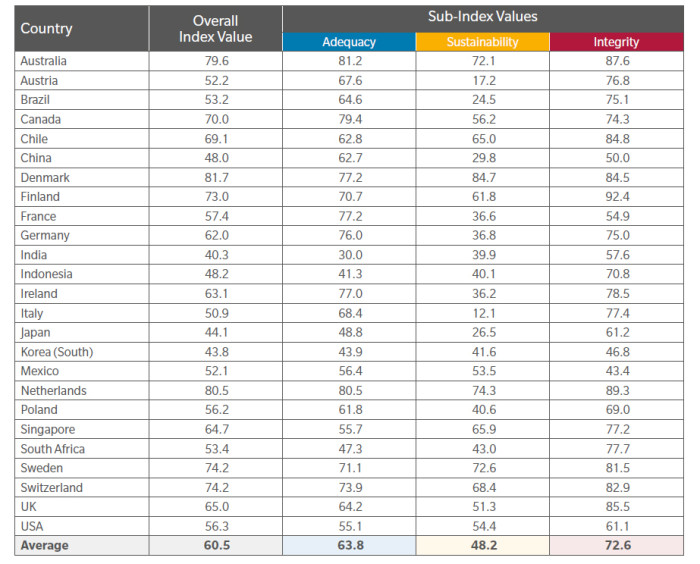 Among other Asian nations, China’s index was pegged at 48, down from 49 in 2015, which the report indicated was “a system that has some desirable features, but also major weaknesses… that need to be addressed.”

Per the report, one way to improve China’s overall index value could be to continue to increase the coverage of workers in pension systems.

Another suggestion in the report was to introduce a requirement that part of the supplementary retirement benefit must be taken as an income stream.

The latest annual ranking of the top companies to work for has been released. Did your organisation make the cut?..

The Futurist: A vision for the future

With 87% of adults using digital devices more than two hours a day, employers would do well to help staff care for their eyes...

The automobile giant plans to increase its headcount by 30% in 2015, including hiring new female staff for admin and engineering r..

The national carrier puts the need for this new policy down to temporary surplus of crew in the Sep-Nov period. ..

The 10 most misunderstood jobs in Singapore

Your parents might be proud of what you do for a living, but new research shows nearly half of them actually have no idea what you..