The increasing cost of living is the number one financial concern (85%) for working Singaporeans between the ages of 25 to 45 – a reason for HR leaders to pay more attention to their rewards strategies.

Close to two in three (63%) cited increasing healthcare costs as the second major financial worry, while the monetary strain of caring for ageing parents worried 57% of employees.

These financial priorities were uncovered in AIA Singapore’s new report, which also found that more than eight in 10 married couples (87%) disagree with their spouse half or more of the time on financial matters.

Perhaps one reason could be that the genders had opposite priorities on what to do with the money they make – the majority of women preferred to put money into savings, while the majority of men opt to channel money into investments.

When probed further, about one in five married individuals said holiday expenses, purchasing big ticket items such as a car, and allocation between savings and investments were the three decisions they typically argued about.

Currently, more than one-third of married employees say they make joint financial decisions all the time, while the 41% majority said most things are discussed on the table.

Detailed findings in the infographic: 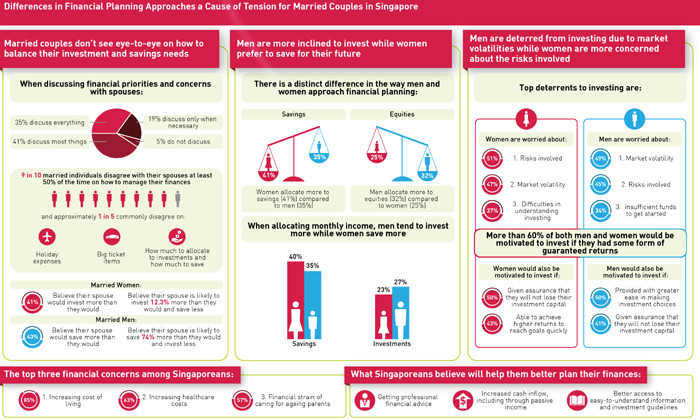 ALSO READ: How appreciating staff might actually kill their productivity

How to make employees love your company by 34% more

Lack of strong leadership pipelines is worrying local firms, as Millennials and Gen Ys voice the need to be led by inspiring bosse..

Candidate walks out on interviewer who was late

An attitude problem? Or a reasonable expectation by a candidate from a potential employer? Experts share their views. ..

To meet the fast-evolving needs in Singapore, the company’s workforce has grown by more than 15% over the past year...

The most popular employers for Singaporean grads

Which companies are succeeding in branding themselves as employers of choice among local students and university graduates? Check ..

Hongkongers share what not to say to the boss

It is never smart to tell the boss you have given up on a task or refuse to work with a colleague - unless you want to get fired. ..