Redundancies in Singapore highest since 2009

In fact, the last quarter has seen the highest number of workers made redundant in the first quarter since 2009.

This was according to a new Ministry of Manpower (MOM) labour market report.

In the first quarter of 2016, 4,710 redundancies were found to have been made in the island-nation.

This figure was still higher than the same period last year (3,500) and the highest recorded first quarter redundancies since 2009.

MOM added that “redundancies are expected to rise in sectors affected by weak external demand”.

It stated that it “will continue to work closely with tripartite partners to provide employment support and help displaced locals re-enter employment, including through the recently announced Adapt and Grow initiative”.

By sector, the bulk of the redundancies this year came from the services sector (54%).

Similar to previous reports, professionals, managers, executives and technicians (PMETs) represented the large majority of layoffs at 71%, partly reflecting their higher share among the employed.

This was followed by production and transport operators, cleaners and labourers (18%) and clerical, sales and service workers (11%).

When it comes to short-week or temporary layoffs however, PMETs were among the least affected (22%) while the bulk of those affected were production and transport operators, cleaners and labourers (69%).

Those affected were mainly from manufacturing (57%), followed by services (28%) and construction (15%).

While most workers were placed on short work-week (88%), the rest were temporarily laid off (12%).

In addition, the report found that only 46% of residents who were made redundant in Q4 2015 managed to re-enter the workforce by March 2016.

“The decline in re-entry rates was broad-based across all age, occupational and education groups, particularly for those with post-secondary (non-tertiary) and diploma and professional qualifications,” the report stated. 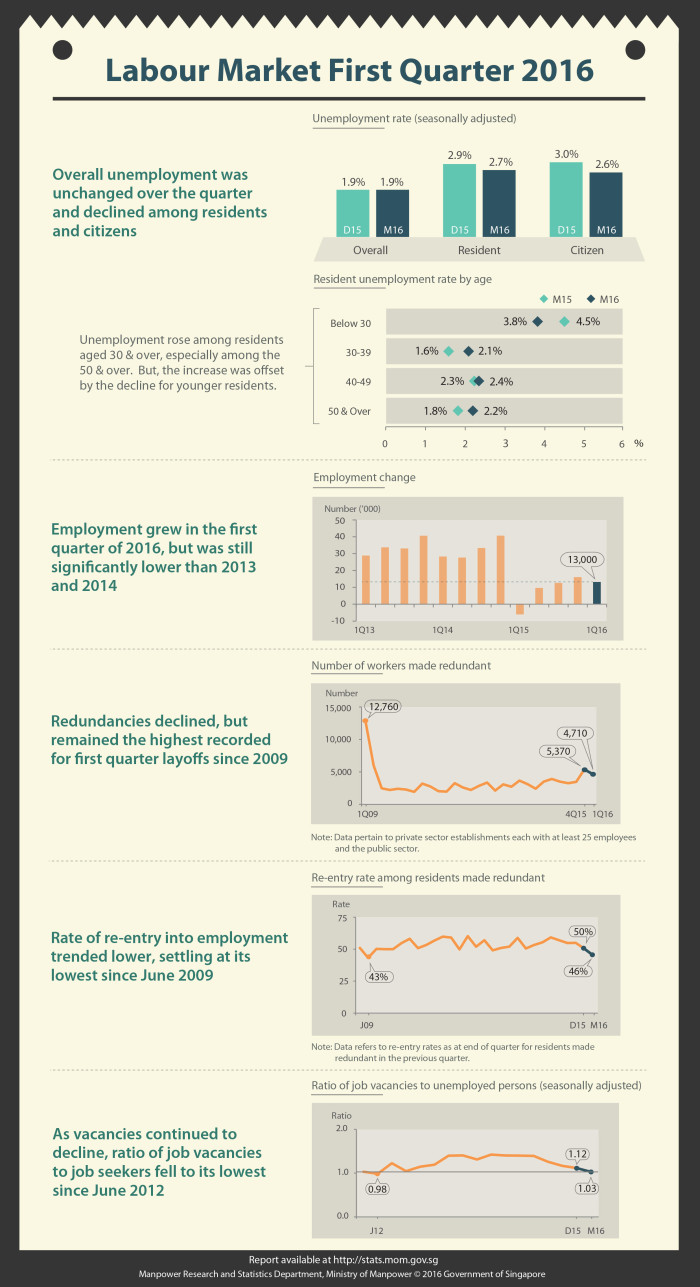 “The increase in long term unemployment rate was observed among residents with secondary and below and diploma and above qualifications, as well as aged 30 and over,” it stated.

Additionally, the report found that as vacancies continued in a downward trend since the beginning of 2015, the job vacancy to unemployed ratio declined.

This decline was found to be broad-based across industries with the largest decline in community, social and personal services (-3,300). This was followed by manufacturing (-1,900), professional services, and accommodation and food services (both -1,600).

On the bright side, information and communications saw increases compared to a year ago, mainly among PMET job openings (+200).

At the same time, the report noted that the seasonally adjusted recruitment rate remained unchanged at 2.4%, while resignation rate decreased to 1.8% in Q1 2016, after holding steady at 1.9%.

How important is it for CEOs in Asia to utilise social media?

How HR can create value from 'outside-in'

Goldman Sachs to axe up to 100 jobs in Asia

The investment bank's main Asian offices in Hong Kong and Singapore are expected to be hit the hardest by this latest round of job..

What NOT to do when celebrating Valentine’s Day with colleagues

No, wishing them isn’t wrong. Giving them lingerie is...

"The biggest impact HR can have in any organisation is to develop and appoint the right leaders into the key leadership positions...

Andrew Chan, founder and CEO of ACI HR Solutions, reveals the secret behind the company's success in a challenging industry...