All you need to know about the gender pay gap – across jobs, experience, industries

It is not news that there is a income pay gap between genders at work and the gap widens as one move up to management level, according to study by Workplace Gender Equality Agency (WGEA).

In the US, women earn 78 cents for every dollar a man earns, according to data published by Bureau of Labor Statistics.

This pay gap, refered to as the uncontrolled gender pay gap, is calculated by comparing the average earnings of all working men to all working women.

Women with similar qualifications working the same jobs as men are also earning less than their male peers, otherwise known as the controlled gender pay gap – at 97.3 cents for every dollar earned by a man.

After looking at more than 1.4 million salary profiles comparing men and women working the same jobs and controlling for factors such as experience, location, hours worked, education, women are earning 2.7% less than men doing the same job.

That may not seem to be a huge gap but Payscale ran the numbers to find out how things like marital and family status, job level, job type, industry, location, education and more affect gender pay equity.

It found that the pay gap widens as one climbs the corporate ladder – and the biggest income gap is between married men and single mothers.

It found men get promoted faster than women, and that women report more negative feelings about job satisfaction, job stress, and communication with their employers.

A big reason why men earn more than women is type of job they do.

In fact, a major cause of pay inequity in general, is that men and women are not doing the same jobs in the first place. Men are simply more likely to hold higher-paying jobs, whether it’s because of the industry, job type, or job level.

Men primarily hold many of the highest-paying types of jobs, like engineering, computer science, and business and finance. Women, meanwhile, hold a majority of teaching, social service and personal care jobs, it found. 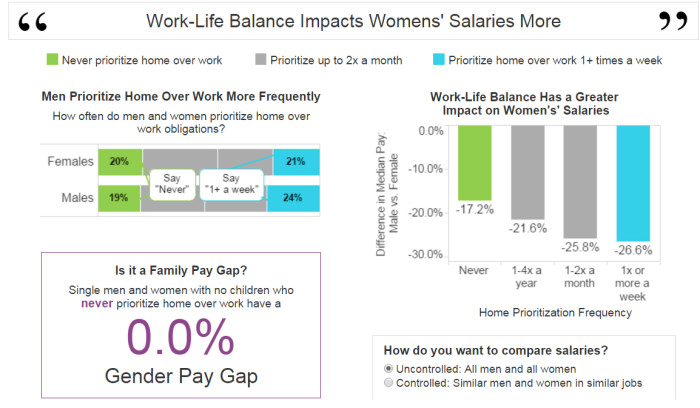 Married men with children get annual median salaries of US$67,900, while those who do not have children earn US$60,800. Single moms make US$38,200 on average yearly.

Studying more also does not seem to help women close the income gap, with the pay gap increasing with the level of education.

ALSO READ: Women are working 57 days for free every year

3 New Year's resolutions you wish your staff would make

This is in line with the bank's aim to equip its 36,000 staff with digital knowledge and skills appropriate to their jobs by end 2..

It also saw the launch of the Talent Champion Awards, a recognition programme for managers who excel at developing staff...

Wage pressure likely to ease for employers in Singapore in 2016: MAS

Get the inside scoop on the strategies Google, GroupM and Philips use to recruit top talent at our upcoming regional conference, T..