Are Millennials getting more loyal?

Last year, more than half of Millennials planned to throw in the towel in by 2020. This year, it seems like Millennials are showing signs of greater loyalty, with more Millennials looking to stay with their employers beyond five years.

According to Deloitte’s Global’s sixth annual Millennial Survey, only 38% of Millennials are planning to leave within the next two years, a drop from 44% in 2016. At the same time, more young professionals are looking to stay for the long term, with 31% planning to stay with their current employers beyond five years, an increase from 27% in 2016.

The survey also found that irrespective of the perceived advantages of working as freelancers or consultants, nearly two-thirds of Millennials globally (65%) prefer full time employment.

This preference accounts for 61% within emerging markets (which includes Singapore and Malaysia) and 70% in mature economies.

“The reasons most often given for preferring a permanent role are that it offers ‘job security’ and ‘a fixed income’,” the report stated.

Nevertheless, the survey noted that flexible working continues to be a feature of most Millennials’ working lives and is linked to improved organisational performance, personal benefit, and loyalty.

This year, two thirds of Millennials revealed that their employers have adopted flexible arrangements, with 69% of Millennials able, within certain limits, to start and finish work at times they choose to, similar to 67% in 2016). Additionally, 68% were able to choose, , within certain guidelines, what they do as part of their job; and 64% are able to work from locations other than their employer’s primary site. 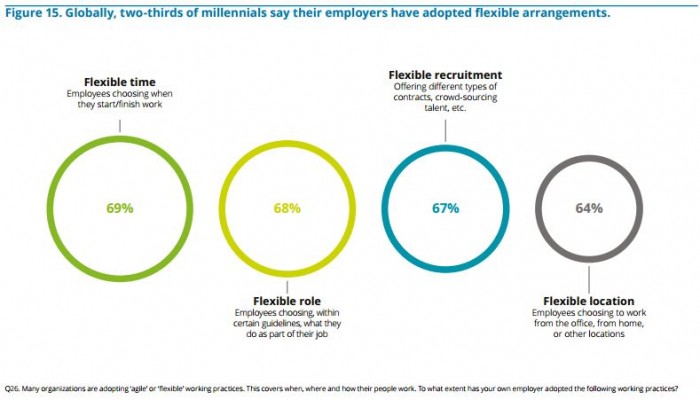 Additionally, the survey pointed out that such flexible arrangements are not simply nice to have, but are strongly linked to improved performance and employee retention.

Organisations offering a high degree of flexibility in working arrangements seem to be rewarded with higher levels of loyalty. In highly flexible working environments only 35% of Millennials see themselves leaving in two years, while that percentage jumps to 45% among those in the least-flexible organisations.

300 workers from unionised companies in Singapore may face retrenchment in the first quarter of 2015...

Income equality has dropped to a record low, as the top 10% of Singapore's earners saw their income dip for the first time since t..

After six years at the helm, Tony Chew is leaving "on a high note". He will be succeeded by Teo Siong Seng for a two-year term...

Your weekly update on job movements in HR - featuring changes from Banyan Tree, Société Générale, Cartus, and many more...

The richest bosses in the world make an average of 331 times the average worker’s annual salary of $35,239...