In BCG’s Sustainable Economic Development Assessment (SEDA), Malaysia has ranked 53rd globally, with a score of 59.8 – in a measure of relative well-being of a country’s citizens and how effectively a country converts wealth, as depicted by income levels.

Singapore is the only Asian country that has made it to the top 10 global ranking, standing on 7th spot, ahead of Finland, Austria, and Netherlands. Rounding off the top six are Norway (score of 85.3), Switzerland, Iceland, Luxembourg, Denmark, and Sweden respectively.

Among other major nations, Australia has ranked 13th, US is on 17th spot, while the UK squeezes in to the top 20 at the 19th rank. Asia is represented by South Korea on the 29th spot, China ranking 72nd, and Vietnam following closely at 73rd.

Coming back to Malaysia, it ranks the highest on the economic stability index at a 88.7 score, but is lowered by the 36.2 score on income, and 46.6 on environment.

The following is Malaysia’s full set of scores: 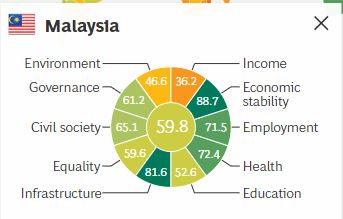 The Futurist: Why employee retention is a thing of the past

Firms are becoming increasingly aware of the need to offer a variety of working arrangements and additional leave benefits. ..

The secrets behind effective development

Joanna Yeo, head of human resources at Bayer Healthcare Asia Pacific, shares her personal insights on how to best develop and groo..

Don't make the mistake of assuming that Singapore's cosmopolitan sheen leaves no room for a local culture, clarifies HCLI's report..

Nanyang Polytechnic and WDA set up productivity centre for students

The centre is aimed to enhance students' job readiness and view on productivity before they join the workforce...