Mainland China to offer the highest raises at 7.4% this year

Employers across the Asia Pacific region are expected to hand out pay rises of 7% in 2015.

While these are comparable to last year, they mean more in real terms, owing to lower inflation rates in the region’s 19 countries in the past year.

Within East Asia, mainland China will offer the highest raises in real terms (7.4%), while employees in Hong Kong will see the smallest in real terms (1.3%) – although the overall increase is pegged at 4.5%.

This play on inflation rates will mean that even though employers in Hong Kong and Singapore both are set to give overall increases of 4.5%, Singaporean employees will see far more of that increase.

Sambhav Rakyan, data services practice leader, Asia Pacific at Towers Watson, explained, “The Singapore government has been sticking to a tight monetary policy to keep the lid on inflation.

He added, “In Hong Kong, at least employees will receive higher real increases than last year (0.1%) thanks to a modest fall in inflation.”

ALSO READ: Hong Kongers received a 4.2% rise in average base pay this year 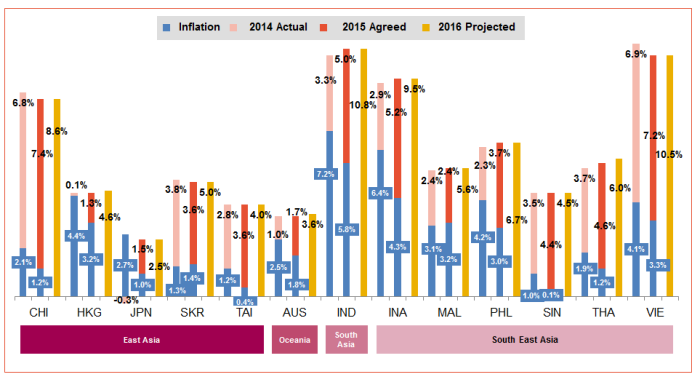 Accordingly, salary increase budgets for 2016 in Hong Kong and Singapore are forecast to rise 4.6% and 4.5% respectively.

Overall, in APAC, 2016 is likely to see nominal salary increases dipping slightly to 6.7%.

Across all industries, close to 80% of respondents said they plan to allocate a larger portion of their salary budget to high performers – especially in the three core industries of financial services, technology and healthcare/pharmaceutical.

However, he pointed out the greatest rewards will go to the top performers, who are seeing salary increases of approximately 1.5 times that of average performers.

Good performance is rewarded even more strongly in markets where overall salary increases tend to be higher. In India, increases for the highest-performing employees average 12%, nearly twice the regional average.

“The aggressive pay increases for high performers shows how urgently companies, especially in emerging markets, are focused on recruiting and retaining top talent.”

Building your employer brand with the Millennials

Promotion without a raise is more common in Singapore than expected

Less than one-fifth of companies locally make it a habit to give promoted employees a pay rise. Here are the reasons. ..

DBS Group to award its employees with S$1,000

As part of SG50 celebrations, the bank will award all employees below VP level a red packet containing $1,000...

In fact, the report stated that 78% of expats have generally found it easy to settle down in the country...

The most popular employers for Singaporean grads

Which companies are succeeding in branding themselves as employers of choice among local students and university graduates? Check ..