Hong Kong which had the highest level of income inequality in the developed world with a Gini coefficient of 0.537 in 2012, is now seeing low-skilled workers receiving pay rises more quickly than highly-skilled workers.

Hays Global Skills Index which assesses the efficiency of the skilled labour market in 31 countries, gave the city the lowest score possible of 0.0 for the indicator “wage pressure in high-skill occupations” .

This means wages for highly-skilled candidates such as managers, senior officials or skilled trades are rising slower than for low-skilled candidates, such as process, plant and machines operatives, and administration workers.

That implies, there is less intense competition for high-skill vacancies than has been historically seen.

The index, produced in collaboration with Oxford Economics was based on seven labour market indicators, with each carrying the same weight. A score close to 0 indicates little to no pressure, while a score close to 10 shows severe pressure.

ALSO READ: What Hong Kong’s labour force will look like in 2046

On the contrary, for the second consecutive year the city received the highest possible score of 10.0 for the indicator “wage pressure” which means wages are increasing much quicker than the city has historically seen.

Dean Stallard, regional director of Hays in Hong Kong said the score supports the situation in the city where there is a tight labour market with employers competing for talent based on salary.

“Add the launch of the Shanghai-Hong Kong Stock Connect and the Territory’s position as a leading global financial centre, and it’s no wonder the labour market is pressured.”

“It also shows that further salary increases will likely do little to alleviate the skill shortage,” he added.

ALSO READ: CEO salaries to be listed as a ratio of workers’ pay, but will it help?

Hong Kong received a score of 6.2, a point increase of 5.1 from last year,which means that industry-specific skill shortages are becoming more acute.

“Some industries like engineering, technology and life sciences for example, require higher-skilled staff than other industries,” explained Stallard.

“As it takes time to undertake the training necessary to work in those industries, it potentially makes them more vulnerable to skill shortages as the number of people qualified to start work cannot be changed quickly.”

The third pressure point was “labour market participation” which measures the degree to which Hong Kong’s talent pool is fully utilised. The city received a moderately high score of 6.1.

Dean explained that the pressure is high because most of the labour force is already utilised and therefore the available talent pool can’t be increased in great numbers.

“With a positive forward economic outlook, both vacancy activity and candidate demand will intensify further and employers must innovate to attract top talent,” he said.

For the remaining three indicators of the index ranked Hong Kong fairly positively.  The education system is very well equipped to meet future talent needs with a score of 1.8 for education flexibility.

Labour market legislation is fairly flexible at 2.4 and candidates usually possess the skills employers are looking for, with a score of 4.9 for “talent mismatch”.

Human Resources spoke to industry experts on the indicator of pay rises for low-skilled workers.

“The competition for unskilled workers like dish washers is intense, chain stores are offering more than HK$1,000 a day for a dish washer,” he explained.

“Employers are trying to get staff to stay by offering more money but the small businesses do not have the resources to compete with chain stores. I predict quite a number of restaurants will close down around Chinese New Year,” he added. 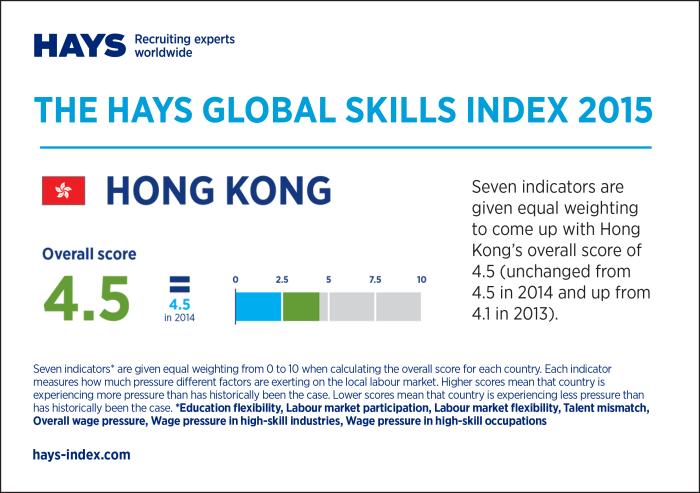 29% of Singaporeans eat lunch at their desk almost everyday

To make things worse, 64% of locals spend 6-9 hours sitting at their desks daily. A stressful work culture? Or a lethargic workfor..

The HR leader talks about the comprehensive employee onboarding programme that attracts expats to Malaysia, as well as the tools f..

Yet one third of employees who claim to have experienced sexual harassment in Hong Kong have not reported it. ..

How Asia’s SMBs can win at digital HR transformation

Picture the ideal company for the digital economy: now place your company in that vision by acting on three critical imperatives...