A man got himself fired after he walked off the job because his boss was late to work.

Joe Blumm, a gas station worker in Michigan, accused his boss of being “negligent” for being over one hour late to relieve him. So, he decided to walk home, leaving a note for her to find instead.

The note eventually got him fired, Gawker reported, but Blumm told local news station Fox 17 he did not regret the note.

“I know I struck a chord with a lot of disgruntled, low-paid employees who get the short end of the stick,” he said. 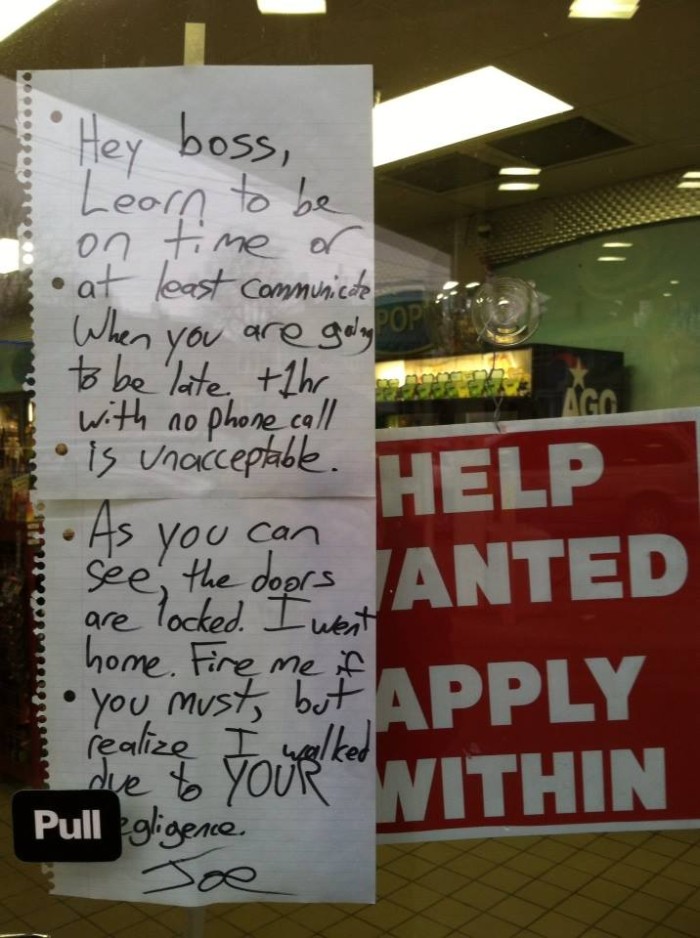 The image, which was posted by a passer-by to Reddit, says:

“Hey boss. Learn to be on time or at least communicate when you are going to be late. +1hr with no phone call is unacceptable. As you can see, the doors are locked. I went home. Fire me if you must, but realize I walked due to YOUR negligence.”

Fox 17 attempted to contact the manager, who reportedly said although she was late, no one working at the gas station received a phone call from Blumm before he closed the store.

The dangers of hating your job

April Fools' Day jokes you can actually use

Worker-led activist group OUR Walmart plans to gather data on employee experience with the app to show the company what’s broken. ..

Spacial Awareness: Looking into the future

BT Southeast Asia's head of HR shares why it's important to realise company culture is "highly dependent" on the physical office s..

Colleagues can no longer "hunt" for red packets, but the different ways they can drive you crazy are beyond your imagination. ..

Hong Kong is APAC’s most productive, innovative and collaborative market

Staff are supported by the right people in offices, are empowered with the right technology and have the right tools to work remot..