LOOK: Is this an effective job ad to scout for “beer tasters”?

In a new campaign, it is offering candidates “probably the best job in the world” – in the role of a beer taster.

The advert promises candidates will “earn $10,000 in just 4 hours”, where responsibilities include being a company ambassador, by popping a cold one during work, or entertaining friends with the drink.

Photos of the advertisement as published in today’s edition of TODAY: 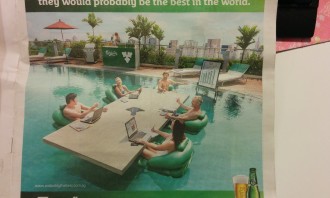 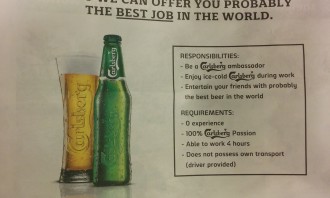 This recruitment drive is part of the next phase of the “If Carlsberg Did…” campaign which was launched in June this year.

The latest in this is a spin on stuffy meeting rooms as the “If Carlsberg Did Meeting Rooms…” print campaign depicts a swimming pool complete with a floating conference table and a Carlsberg bar.

Carlsberg will not be following typical hiring policies but will invite selected candidates to step out of their comfort zone with an unconventional interview process.

What’s your take on the job ad? Is this a good way to scout for candidates?

ALSO READ: Are these the 5 best jobs in the world?

The top 4 things bosses can do to boost staff engagement

The leader talks about unique HR initiatives, such as the Astro Management Associate Programme held over two years...

It is also understood that Absolute Internship threatened a student with legal action if his complaint was not withdrawn. ..

MBA graduates in demand by employers

Good news for MBA graduates! More recruiters worldwide are planning to hire you and other business school graduates this year. ..