Global business and HR leaders have identified the 10 most critical issues they’re facing this year, and the results have revealed a worrying gap between the challenges and organisations’ readiness to respond.

Based on the findings from Deloitte’s Human Capital Trends 2014 report, which surveyed more than 2,500 business and HR leaders in 90 countries around the world, building global leadership was ranked as the most significant HR issue this year, with 38% of respondents rating it as “urgent” and 48% labelling it as “important”. It was followed by retention and engagement (26% urgent, 53% important) and re-skilling of the HR function (25% urgent, 52% important).

However, the report also found despite a huge majority of respondents acknowledging leadership development as a core focal point this year, only 13% believed they have done an excellent job in this aspect. 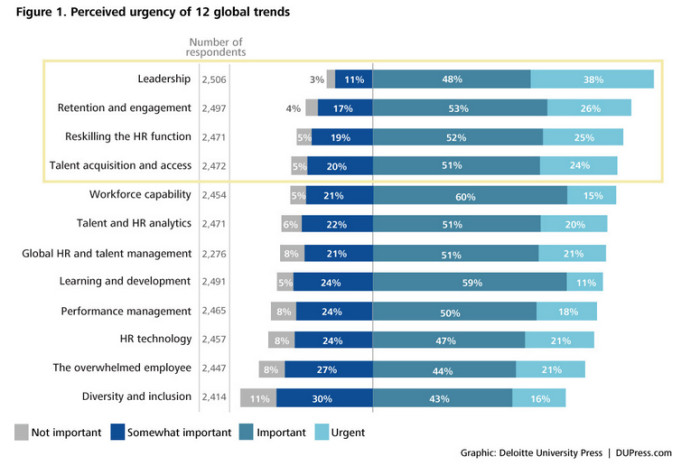 “One of our biggest findings in this research is the fact that doing more is not enough. Today, companies have to manage people differently – creating an imperative to innovate, transform, and reengineer human capital practices,” Brett Walsh, global human capital leader at Deloitte Touche Tohmatsu Limited, said.

“When you add to this the rapidly changing landscape of HR technologies, such as cloud and big data, and their impact on attracting, retaining and developing talent, it becomes clear that re-skilling HR teams is arguably the most critical mission for organisations today.”

The amazing benefits of healthy staff

‘They ain’t old; they’re my colleagues’

Wong Keng Fye explains why older staff are akin to a firm's 'Google search engine', and shares how Maybank develops its older work..

Accessibility integrates physical accommodations such as ergonomic workstations and accessible building features, as well as a sen..

After a spate of accidents involving crane operations, Singapore's Ministry of Manpower has launched an enforcement operation. ..

It’s all fun and games

Those who are already happy with their salary (72%) and those who got a raise before they had to ask (65%) report the highest rate..