Job vacancies in Singapore at a six-year high

Low pay, rather than a lack of skills, is causing Singaporeans to leave an increasing number of jobs vacant.

Almost half (47%) of employers in the country cited unattractive pay as the top obstacle encountered when hiring locals (Singaporean citizens and permanent residents) in the Ministry of Manpower’s (MOM) latest Job Vacancy Survey.

The report defined job vacancies as openings for which employers were actively recruiting employees from outside their establishments. These included new positions created due to business expansions or existing positions that were vacant because of staff turnover.

Almost seven out of 10 (67%) of such open positions were, however, deemed as “hard to fill by locals”, MOM said.

Along with low incomes, factors such as preference for a shorter workweek (39%), and a physically strenuous job nature (37%) contributed to the lack of locals joining the workforce.

The report also broke down the reasons hindering local employment by profession, including professionals, managers, executives and technicians (PMETs) and non-PMETs.

MOM also revealed services accounted for four in five of all vacancies (or 49,860) in September 2014. The bulk of the vacancies came from community, social and personal services (13,040 or 21%), reflecting the expansion of childcare and pre-schools, healthcare and tertiary institutes.

Associate professionals and technicians were also in strong demand, with some 12,000 openings that required filling.

The opening of new shopping malls also led to robust hiring in wholesale and retail trade last year, including accommodation and food services, and administrative and support services.

Manufacturing contributed another 13% of the vacancies, while the remaining 5.7% came from construction.

“There were vacancies available for all educational levels, with more for both ends of the educational spectrum. Specifically, those requiring at least primary or lower (14,720 or 24%) and university degree qualifications (13,060 or 21%) were most in demand,” the report stated. 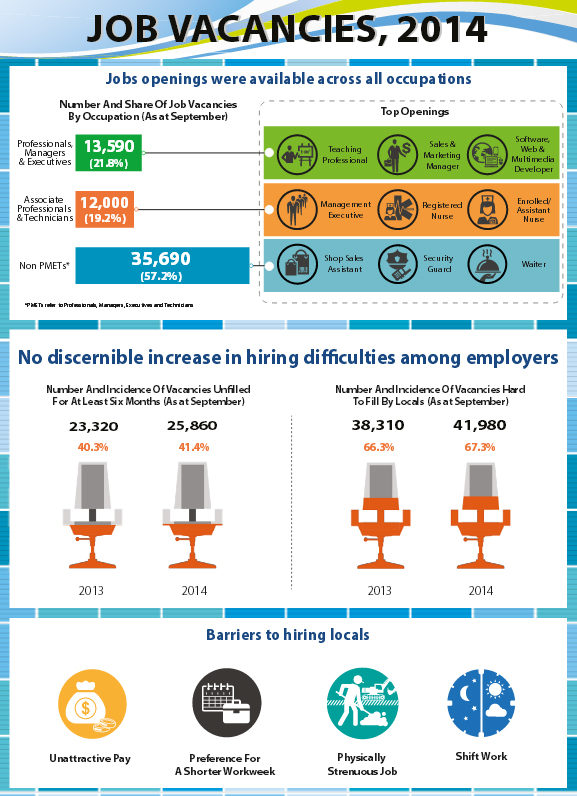 40% of staff in China look to quit over low bonuses

How to avoid disappointing new employees

Almost one in five employees have experienced discrimination, mainly on age and gender grounds...

Bosses in Singapore to receive almost $2 billion in WCS payouts

Visions of a utopic society, where robots do all the work while humans enjoy all the leisure, have largely come and gone. Developm..

New CEO for Singapore’s CPF Board

Ng Chee Peng, the current deputy secretary (special projects) of the Manpower Ministry will take up the CEO role. ..

The change could indicate the company plans to eliminate its controversial stack ranking system...