The industries with the fewest women leaders

Many organisations are pledging gender parity. Despite that, only 23% of senior management roles in APAC are held by women. Why is the gender gap still so prevalent and what can companies do to improve their gender diversity?

According to a recent report by McKinsey,  when it comes to gender diversity, many organisations are stuck with one of three common pipeline pain points – women are unable to enter, stuck at the middle or locked out at the top.

The retail and consumer goods, media and telecom, and financial and professional services sectors were identified as the industry causing the biggest blocks for women wishing moving into top-level executive positions.

For example, in the retail and consumer-goods sector, there is a relatively high percentage of women in entry- and mid-level roles. However, the proportion of women drops to 13% (vs 18% overall), reflecting below-average top-level promotion rates.

While women were 92% as likely as men to make the jump from senior vice president to C-suite roles overall, those in retail and consumer goods had far lower odds (45%). Slightly more than a fifth of women in this sector feel that gender is a priority for their CEOs (vs 35% overall).

When it came to joining the workforce, women are unable to enter mostly in the automotive and industrial manufacturing, energy and basic materials, and technology sectors.

In the technology sector, for example, women hold slightly more than a third of entry-level roles, compared to 45% of the report’s overall sample, this leads to continued underrepresentation at each stage of the pipeline.

Unsurprisingly, 38% of women in technology feel that their gender will pose a problem for their career advancement in the future.

When women are stuck in the middle, it is typically when organisations focus considerably on achieving greater diversity during recruitment and fail to follow through with these efforts when it comes to the first few promotion cycles.

The sectors experiencing these challenges most frequently include logistics and transportation, healthcare and pharmaceuticals, and hospitality.

A typical example can be seen in healthcare and pharmaceutical companies which start out with more women in entry level roles than many other sectors do (59% vs 45% on average). However, when it comes to the vice-presidential level, the number of women drops to 30% – similar to most other sectors.

This means that women in these sectors only have a 64% chance of making the jump from senior manager to director or VP, while as a whole, the odds are 85%. The report also noted that only 37% of women in healthcare and pharmaceutical companies feel they have fewer opportunities than their male coworkers do, versus 49% in other industries.

READ MORE: 3 things we learnt about diversity at the 2016 Oscars

The report concluded: “Targeting pipeline blockages isn’t a panacea but can be a valuable means of jump-starting progress. We hope the patterns we’ve described here will help companies to focus their efforts, make meaningful changes, and build momentum to deal with less visible barriers.

“Tackling gender issues should not be a firefighting exercise—jumping, every year, to the next thing. It takes a strategic eye to find the root causes of gender inequality and build a new kind of organisation.”

For a clearer view of what problem your sector is facing, check out the infographic below. 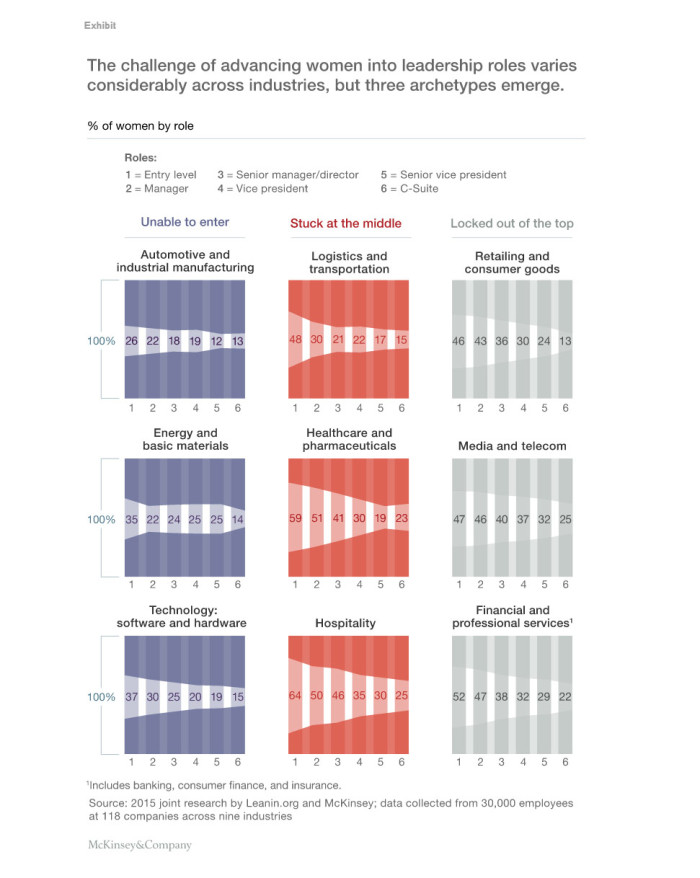 The IT field continues to blossom while the traditional media industry is declining rapidly, in terms of work environment and pay...

1.54m Singaporeans to get GST vouchers and Medisave top-ups

The Ministry of Finance says letters will be sent out by July 1 informing citizens of their 2016 GST vouchers and other budget ben..

Employees in the US love these 50 CEOs

Google's Larry Page gets the highest approval rating from staff at 97%, while CEOs from NIKE, Facebook and Monsanto also get nods...

When is the best time to meet with candidates

Interviews are often treated as a low priority and indelicately squeezed into open slots in one's calendar, getting the timing rig..

Traits in a boss that nobody likes

Micromanaging and being overly critical may hurt morale and productivity..