What HR can learn about candidates from their address

Making use of figures collected in 2011, the Census and Statistics Department has listed the percentage of residents living in over 400 major housing estates in Hong Kong that have received tertiary education.

The department defines major housing estates as premises with no less than 3000 residents or no fewer than 1000 units.

Commentator Leung Kai Chi has ranked the top 75 housing estates with the highest percentage of people with tertiary education below; and here are four observations which can help HR with talent acquisition.

All the housing estates in the top 75 are private, in fact, the first non-private housing estate does not show in the rankings until it reaches 215 – Ka Wai Chuen located in Hung Hom. This implies there is a significant gap in the education level between residents living in private and public housing.

2. Where do the most educated people live?
The educated guess is Hong Kong Island, but not many estates on Hong Kong Island made the list. Leung explained this may be due to fact that many highly educated individuals, living in the Mid-levels or other traditional luxurious housing areas are not in the rankings, because the scale of the housing estate they stay in is too small to quality for the list.

3. Those living in new housing estates are the most educated
Many traditional housing estates such as Taikoo Shing (35), City One Shatin (75) and Mei Foo Sun Chuen (96) do not occupy high spots in the rankings. Leung said many of these premises were purchased years ago in an era when people with less education could still afford private housing.

On the other hand, housing estates that were built in the past two decades have a very high percentage of well-educated residents. Relatively new housing projects in Tung Chung such as Seaview Crescent (12), Coastal Skyline (14) and Tung Chung Crescent (19) are all high in the rankings, with more than 45% of the residents having received a tertiary education.

4. Locations with the least number of graduates with a tertiary education

The diagram below lists the top 75 “most educated” housing estates. Estates marked in blue are located on Hong Kong Island, those in red are on Kowloon and green are in the New Territories. 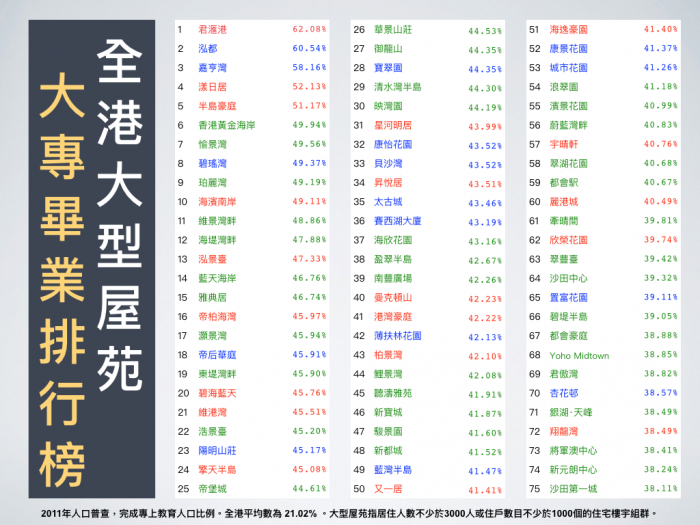 ALSO READ: Would you reject candidates for these reasons?

Shares in return for silence: Are companies bribing employees?

Volkswagen to ban Pokémon Go over fears of product leaks

Since players of the game use both a camera and GPS location to locate and capture Pokemon, the automaker has reasons to be worrie..

Would your employees recommend working at your company?

Disengaged Singaporean employees wouldn't recommend working at your company because they feel unappreciated by their bosses. ..

Are you asking candidates the right things?

Curveballs or basics? Hiring managers revealed the favourite questions they asked to recruit the best. ..

Looking to hire candidates solely based on their skill set? Here are three tips to help remove prejudice from your recruitment pro..