A heavy workloads would seem like one of the prime reasons for professionals to go on vacation.

New research, however, points to the opposite.

A recent survey by Accountemps, which includes responses from more than 1,000 U.S. workers 18 years or older, has revealed the main reasons why employees are taking fewer vacations days.

The most significant reason was the added amount of work they would have to deal with upon their return (41%).

This was found especially among workers aged 18 to 34 – 55% of such workers had skipped or taken a short vacation because of this concern.

Following a heavier post-vacation workload, 35% of all professionals surveyed also said they took fewer or no days off because they worried about their colleagues absorbing their workload.

“Thanks to 24/7 email access via smartphones, the lines between work and personal time are becoming more blurred, especially while on vacation,” said Bill Driscoll, district president for Accountemps. “It’s important to take a break from your inbox and use your vacation time to relax, so you can return to work with renewed energy.”

In line with those observations, the survey found that 36% of employees ages 18 to 34 check in at least once or twice a day.

To make things worse, 41% admitted to checking in with the office at least once or twice a week while on holiday.

Other findings from the survey included: 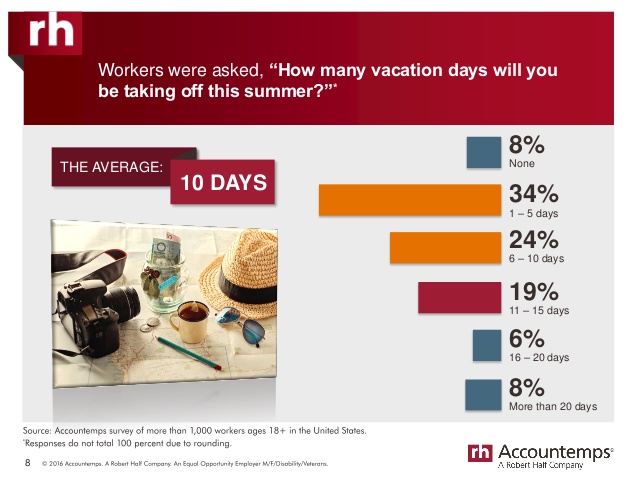 Time to give working parents a break

She recommends giving staff a variety of forums to collaborate, across business functions; including through CSR and social activi..

HR job moves of the week from Weststar, ServiceRocket, Genting, and more

Local HR directors can expect to earn a monthly package of up to HK$120,000, with demand for C&B and payroll experts going up. ..

Malaysians have a third of 2012 for rest days

82% of staff were happy with their jobs despite receiving low pay, as long as bosses told them the reasons for their smaller salar..