Men in the creative sectors continue to earn more than their female counterparts, particularly after both parties exceed nine years of experience.

According to font’s Market Pulse, Annual Salary Report, those working in the creative, digital and marketing industry saw an overall downward salary trend across every sector in 2013.

The report also found women tend to decide to leave their roles to attend to family responsibilities at the six to nine-year mark, causing the salary disparity to widen between men and women.

“Whilst salaries between genders were relatively equal in the early years of their careers, the study found wide discrepancies at around nine years experience, suggesting women were leaving the workforce, or seeking professions that offered more flexibility,” the report said.

Women working in multimedia design and digital roles felt the biggest pinch; those in back or front-end web development saw a 61% salary drop to RM35,000 last year, while those in management saw a 57% decrease to RM77,500, and those in production or project management saw a 47% drop to RM40,000.

Men working in communications saw the biggest salary drop among the gender, with a 46% decrease to RM62,500 annually. However, the highest increment among men was for those working in a PR agency, as they received a 64% increase to RM57,500.

However, font’s Asia regional director Karin Clarke said salaries and demand is expected to rise for skilled workers in these sectors in 2014.

“As cutting-edge brands look to keep ahead of the curve and reach discerning customers through social media and smart phone penetration, we’re predicting increased investment and headcount in top-tier agencies, with a particular focus on digital,” she said.

“With that increased demand, we’re expecting salaries to rise.” 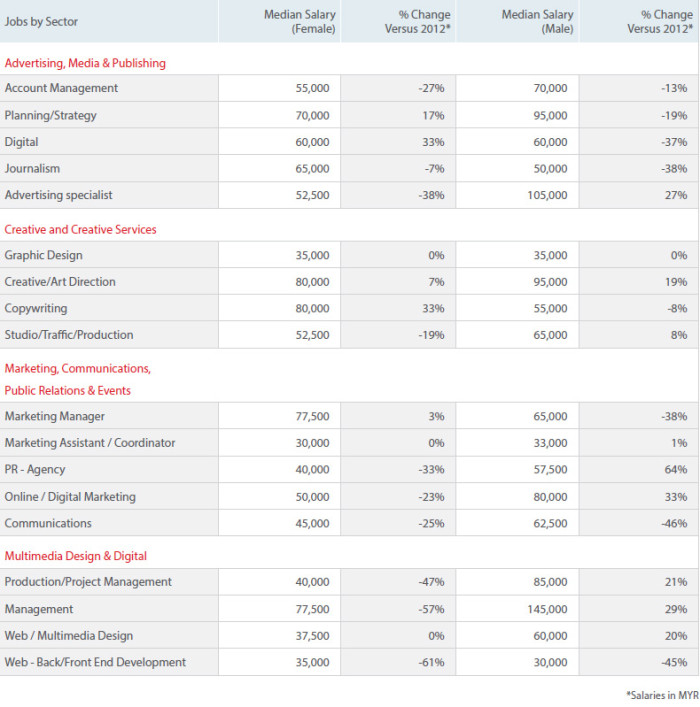 Is your company at risk?

While it's not possible to have minions as your employees, it is possible to invite the yellow cuties to brighten up a workday. ..

MOM’s take on collecting data on freelancers in Singapore

The Ministry has started collecting data on the proportion who are not freelancing as their preferred choice since 2016...

16.5% are unhappy with the condition of their workplace toilets

New survey reveals that more than two in five felt their workplace toilets needed to be better maintained...

Employees in Singapore clock in 45.6 working hours weekly in Q3 2016