The most expensive countries for health insurance for expats

With more and more people living and working outside of their home country, global mobility has become a larger agenda in the manager’s toolkit in the past couple of years.

Where expatriation previously referred to a senior level leader moving to another country to set up operations, today it can happen at any level, for a variety of reasons and tenures.

The assignees are often provided support from their employers, in terms of housing, education, or a lumpsum relocation allowance that helps make the shift easier.

Recent reports by Pacific Prime have helped pull out data around health insurance programmes for expats across 94 countries, in a bid to aid the decision making process.

Among this region’s most popular expat destinations, Hong Kong takes the top spot, with an average cost of US $10,391 for an individual health insurance plan. 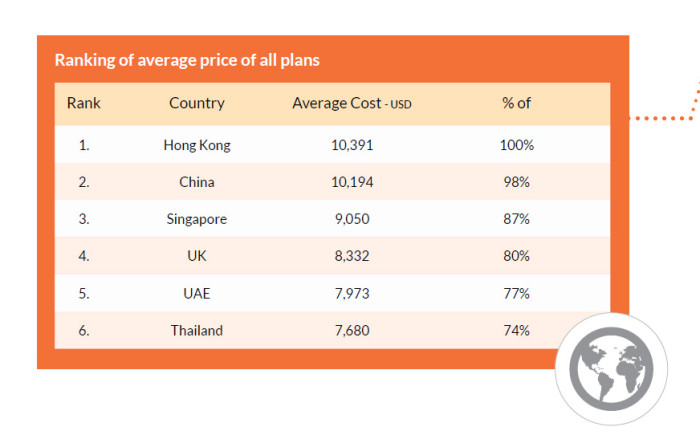 The extremely high cost of living, the increasingly costly healthcare, and the high volume of plans purchased in Hong Kong are the reasons identified in the report for it being the most costly.

“As expected, Thailand, has the lowest average costs for health insurance (USD 7,167, or 26% lower when compared with Hong Kong) among the countries involved, largely due to the lower cost of living and generally cheaper cost of healthcare.

It may be worth nothing that if the US is included, each country shifts one rank down on account of the it being the most expensive country overall, at an average cost of $21,892.

This was explained in the report: “This highlights the fact that while premiums may seem high in the top expat destinations, they are still far lower than those in the US.”

Following US as the most expensive country for expat health insurance in the world was Hong Kong, and Israel, which just edged out China, for the third position.

A tad surprisingly, Poland turned out to be the cheapest country for the cause, with an average cost of $6,687.

The reason for this, as stated in the report, was the quality and accessibility of the public system. Medical coverage is available for 98% of the people, funded via mandatory tax deductions from all employed people.

The following are the world’s 10 most expensive countries for health insurance for expats:

The strangest things staff do at work

Pick up the phone to scout for passive candidates

The 10 most needed workers in Singapore

The latest annual talent-shortage survey has revealed the country’s most wanted workers. ..

Case study: How 3M is accelerating women in leadership

Head of HR, 3M Singapore, reveals how the firm's initiatives helped it achieve 60% women in its local leadership team...

Your weekly update on job movements in HR, featuring changes from Talent Plus, British Council, Mövenpick Hotels & Resorts, and mo..

Salary and hiring trends for Singapore in 2018

The march for 17 days of statutory holidays for over 850,000 locals from firms such as Hong Kong Disneyland will be held on Friday..