Expect salaries in Singapore to increase by 4.1% this year

With Singapore being the seventh costliest city in the world, employees would sure be waiting for some good news for a corresponding increase in salaries.

That’s on the cards, according to a new survey by Mercer, which found employees in Singapore can expect a salary increase of 4.1% this year.

Overall, the average salary increase in APAC has been forecasted to be 7.3% – higher than that of Western Europe and the United States. 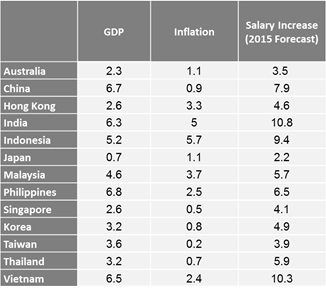 Industry wise, the life sciences sector in Singapore is likely to see the largest increase in wages of 4.6%, followed by the consumer goods sector and chemical sector, both with a 4.4% increase.

On the other hand, the high-tech sector was expected to see the lowest increase of 4.2%.

Here are the industries with the highest and lowest expected salary changes: 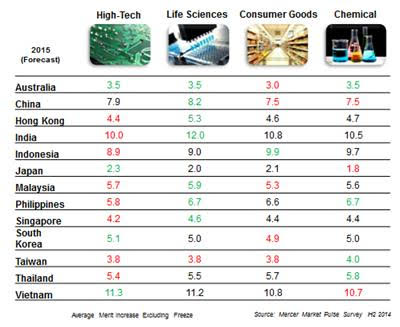 ALSO READ:
Want to hire staff in Singapore? Focus on salary and benefits
Half of Singaporeans say salary isn’t enough to live on

Along with predictions in salary changes, the research also shed light on expected retention and attraction rate changes in companies.

It revealed that employers across most parts of APAC, with the exception of Japan and South Korea, would possibly encounter double-digit turnover rates.

“After a gap of three years, we are seeing changes in hiring intentions in Asia Pacific,” said Puneet Swani, partner, information solutions & rewards practice leader for Asia, Middle East and Africa at Mercer.

“The consistent hiring which had continued unabated over the past three years has begun to slow down. Although four or five companies out of ten are still looking to increase headcount, especially in emerging economies, this number has decreased from six to seven in the past few years.”

He added that sales and marketing, technical/engineering and, finance and accounting functions continue to be the sectors which are hiring the most.

How the McFamily keeps its members engaged

Singapore is Asia’s most innovative city

Singapore has been ranked the region’s most innovative city, ahead of Sydney and Hong Kong. ..

Up the ranks: Benjamin Roberts is now VP – talent management APAC at Essence

Roberts says his priority is to continue Essence's growth in the region whilst building, developing and attracting new talent...

TUMI has appointed Fernando Ciccarelli as the company's SVP and MD for Asia Pacific, based in Hong Kong...

80% of managers say checking emails interferes with getting tasks done

As a result of manual processes, managers complain of being left with less less time for strategic initiatives and lowered product..

Randstad to acquire Monster for $429 million in all-cash deal

Monster will continue operating as a separate and independent entity under the Monster name...