Are employers in Singapore doing enough for workplace injury compensation?

In a parliamentary sitting, ministers Denise Phua Lay Peng and Kuik Shiao-Yin both asked Singapore’s Minister for Manpower, Lim Swee Say, about protecting workers, including foreign workers, against errant employers who do not insure or compensate them for injuries or owe them their salaries.

In response to the workplace injury query, Minister Lim said in 2016, over 99.9% of the approximately 16,000 injured workers had their cases successfully resolved. However, five were unresolved as the employers had failed to purchase work injury compensation (WIC) insurance and were unable to pay due to financial difficulties.

He pointed out that such companies and individual directors are debarred from hiring foreign workers, until they compensate their workers. Such offences carry a maximum penalty of S$10,000, or imprisonment of up to 12 months, or both.

In the last five years, 14 employers have been prosecuted for non-insurance and non-compensation of work injury.

The Minister provided the following data on uninsured workplace injuries in Singapore: 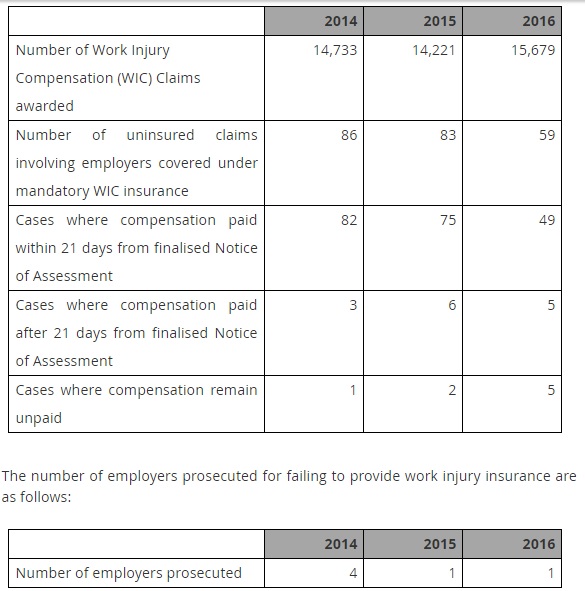 However, he pointed out that chances of recovering payments from employers in most unresolved cases of unpaid salary or work injury compensation are slim – given that such employers are mostly in deep financial difficulties.

For cases with some hope of enforcing the orders, the workers are required to apply for the Writ of Seizure and Sale through the State Courts.

In response to the issue of salaries, Minister Lim noted the Ministry of Manpower (MOM) received about 9,000 salary-related claims involving some 4,500 employers in 2016 – of which 95% of salary claims have been resolved.

Of the remaining 5% of the salary-related claims, one has appealed the Labour Court order and the case is with the High Court, eight are still in business but have yet to comply with their orders, while a majority of employers (199 out of 208) have either ceased operations, or face closure due to financial difficulties.

All these companies have been debarred from hiring foreign workers until they comply with the Labour Court orders. The debarment also applies to culpable directors even if they were to start new companies.

Minister Lim noted: “In the last three years, 158 employers have been prosecuted and convicted for salary-related offences. Such offences carry a fine of between $3,000 and $15,000 per charge, or to imprisonment for a term not exceeding six months, or both.”

Eligible low wage local workers may seek legal assistance from the Legal Aid Bureau, whereas foreign workers may approach the Migrant Workers’ Centre. Workers can also apply to the State Courts Registrar to waive or defer the costs of enforcing the order, or to recover these costs from the sale proceeds.

Foreign workers with valid salary claims are also allowed to change employers. More than 2,200 of such requests were granted in the past three years.

As for workers who are unable to recover their claims because their employers no longer have the financial means to pay, MOM is looking to strengthen measures of support. Workers with more serious injuries will be assisted through the Workers’ Fund managed by MOM.

Why sexy selfies aren’t good for your career

"You look so good! But incompetent." At least, that's the outcome of research into social media and how young women are perceived...

Where will HR be in five years?

Unpaid HKATV workers threaten to pull the plug on broadcasts

After being told to wait another month for their December and January salaries, staff stormed out of a meeting with the management..