What staff would rather do than complete expense reports

At some point of our work lives, everyone would have had the experience of filling out that dreaded time consuming business expense report.

In fact, a new survey by TriNet has shown that staff dislike filling out these expense reports so much that 53% of employees would rather bear the expenses themselves.

Polling 1,000 business travelers, the report found 43% of them would also rather spend an additional hour commuting to work than spend an hour filling out expense reports.

Another 53% stated that they would rather do their taxes than “fill out hours of expense reports.”

The survey added however, that being more than just a time drain, business expense reporting can also have much more serious implications on organisations.

For instance, the survey found the longest time waited before an expense reimbursement was five weeks.

As a result of the long waiting time, 60% of employees have faced problems paying a personal bill.

Additionally, 53% of employees have missed out on professional development opportunities as the expense reimbursement process made it difficult for them to attend.

On an even more worrying note, 71% have expressed that they are likely to look for a new job if their employer were constantly late when reimbursing their business expenses.

ALSO READ: Staff prefer getting a root canal over asking for a pay raise

Generation wise, Millennials have been found to bear the brunt of long reimbursement waiting times.

21% of Millennials were more likely to face difficulty paying a personal bill  when waiting to be reimbursed than the other generations (Gen Xers and baby boomers).

They were also 24% more likely  than the other generations to have not submitted a business expense to avoid completing an expense report.

“Millennials are driving the future of work, yet many companies are still in the dark ages when it comes to the basics of expense management. Simple cloud technology solutions can do more than alleviate the burden for employees – they can be a key factor in retaining great talent and making them more productive,” said Dan Fritcher, division chief technology officer, TriNet Cloud. 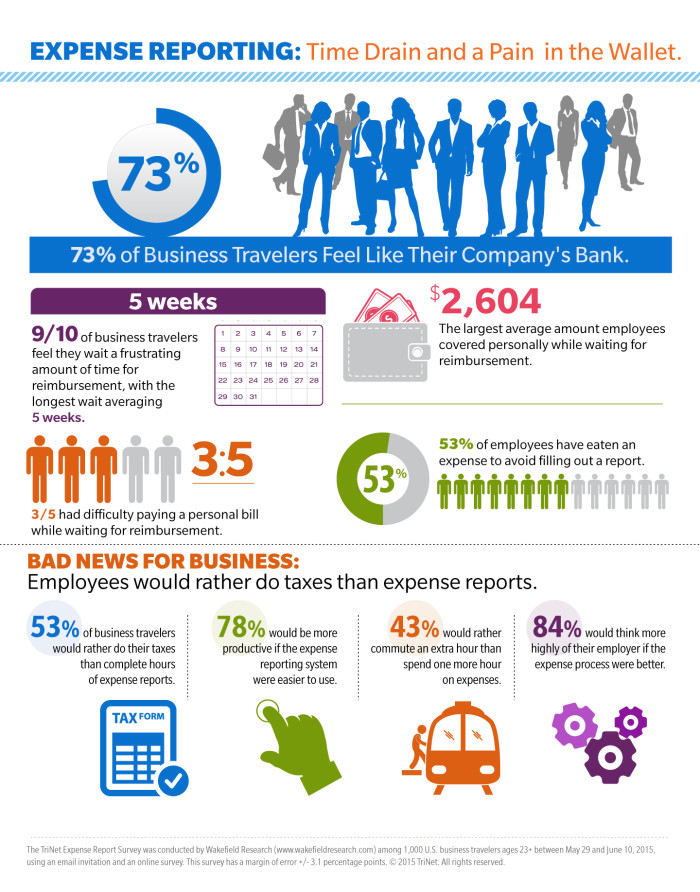 Take your staff on a learning adventure

Many employees are being robbed on a daily basis, from stationery to food and drinks in the pantry...

Has email taken over your life?

Whether you're reading this in bed, during breakfast, or at work, chances are it hasn't been long since you checked your inbox. ..

Over 700 employees paraded the mass hiring drive, offering interested candidates a taste of the work culture at the fast food chai..

The skills HR needs to be data-driven

In an exclusive interview, Anthony Bruce, partner at PwC, shares why HR needs to be curious if it wants to leverage on data better..

Expected to create 200 PMET jobs each year till 2020, the hotel industry looks to redesign rank and file jobs, and introduce robot..