According to the latest Salary Trends survey by ECA International, employees based in Malaysia are forecast to see real wage increases of 2% in 2017. This is down on the 3.1% in 2016 due to rising inflation.

“Low unemployment continues to exert upward pressure on wages in Malaysia and this is reflected in the 5% nominal salary increases forecast next year,” said Lee Quane, regional director – Asia, ECA International. Lee added that due to labour costs being higher in Malaysia than some of its competitors, investments are lost, especially to other ASEAN member economies.

“As is the case with Singapore, the regional economic slowdown is contributing to rising inflation, which is why employees based here will be worse off next year than in 2016,” added Lee. 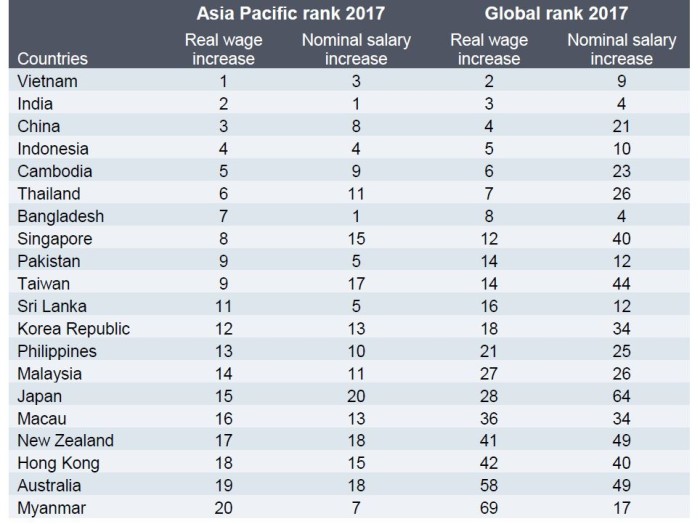 As for other regions, Hongkongers will see their salaries increase by an average of 4% again in 2017. With inflation predicted to be 2.6% in 2017, employees will experience the third lowest wage increase in Asia Pacific, estimated to be a 1.4% increase in real terms. In fact, employees based in Macau are forecast real wage increases of 1.7% in 2017, overtaking Hong Kong in the regional rankings.

Regionally, the survey reported real wage increases in Asia Pacific are expected to be 2.6% next year on average. This is higher than all other regions surveyed. In terms of real salary increases, staff in Vietnam will experience the highest regional and second highest global real wage increase next year at 5.4%.

On the other hand, staff based in Myanmar can expect to be 1.6% worse off in 2017. Despite being forecast nominal salary increases of 7.5%, inflation forecast at 9.1% translates to them being the only location in the Asia Pacific region to see staff worse off next year.

Office heat: Is your workplace too cold for productivity?

Funnily enough, more than half of respondents believe that the optimal office temperature should be set between 17° and 20°C. What..

The secrets behind how CEO salaries are determined

Turns out there's a reason why CEO pay packages look similar across firms - in terms of fixed salaries, bonuses, and performance...

The lifestyle disease is most rampant in the capital Delhi NCR, followed by Bangalore and Mumbai...

Is artificial intelligence killing the job of the data analyst?

A few years ago, data scientists were deemed to be the coolest kids on the block, today it seems they too are fast being replaced...

Shifting mindsets through the power of storytelling

Most companies focus on skills, with too little effort on creating commitment by shifting mindsets, the author argues. ..