Employees in Malaysia bracing for 5.8% salary increment in 2016

The implementation of the Goods and Services Tax (GST), depreciation of the Ringgit, declining commodity prices – all of which led to a decline in Malaysia’s GDP to 4.7% in 2015.

The year 2015 also saw performance-related bonuses increasing slightly to about two to three months of annual base salary, and are projected to remain stable in 2016.

Projected salary increases were highest in the telecommunications sector at 6.6%, followed by transportation as well as construction, pegged at 6.2%.

Hi-tech and hospitality sectors are gearing up for the lowest sectoral increments at 5.2%. 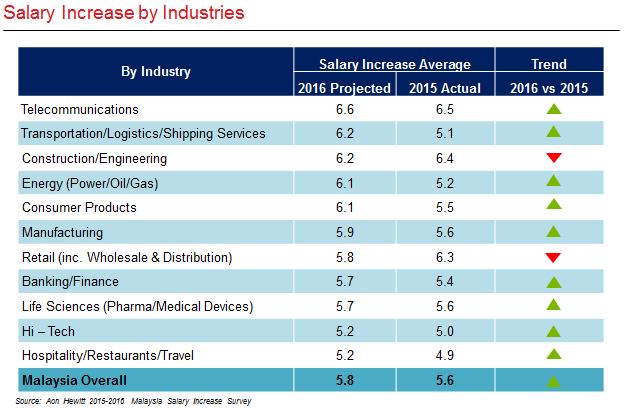 Similarly, the three most popular measures to retain employees were: pay above market, improved work life balance, and timely and meaningful feedback from managers.

Nur Amani Yusnida, Aon Hewitt’s performance, reward and talent practice lead in Malaysia noted that employers are taking a “wait and see” approach to budgeting salaries – reflected in the average increase of 5.7% over the past 5 years.

She added: “Voluntary turnover is trending down this year at 9.5% from 12.2% in 2014 reflecting the volatility and instability of the market conditions in Malaysia.”

The report also found links between how economic trends such as the depreciation of the ringgit, the implementation of the GST, and the road toll hike are impacting employees.

To cope with higher living costs, 22% of organisations have plans of providing higher salary increases than initially budgeted for, while 7% are providing a one-off salary adjustment.

Close to half of organisations (47%) have revised their benefits programme in the last two years, particularly the medical limits and mileage claim.

In light of these external factors, Surendran Ramanathan, Aon Hewitt Southeast Asia’s retirement and investment practice lead advised companies to ensure their rewards dollars are spent more prudently to get the biggest bang for the buck.

Early intervention for employee health can cut sick leave by 17%

"Flexible working can help older workers delay retirement without giving up too much of their hard-earned freedom.”..

HR job moves this week from JTI, Nestlé and Cargill

The annoying phone habits of colleagues

If colleagues want to use their phones in the office, they need to learn some manners...

Mondelēz International University and iTaste graduate programme are among some of the snacking major's investments this year. ..

Is banking’s dry spell over?

The local finance and banking sector may finally be looking to expand their headcount, but the good news could be limited to a few..