The dirtiest offices in the world

A global survey by Regus has revealed shabby and dirty meeting rooms is the biggest grievance of employees, where some 39% of Hong Kong workers (and 36% globally) blame their none-too-tidy colleagues who leave the rooms filthy, with dirty cutlery and cups from the previous meeting.

Lithuania topped the list, with the world’s dirtiest meeting rooms, while Kuwait placed second on this grubby list.

Offices in Mainland China and the Philippines didn’t have a good defence either, ranked third and fourth in the list, rounded off with Indonesia in fifth spot. Hong Kong meeting rooms placed seventh, slightly dirtier than those in the UK. 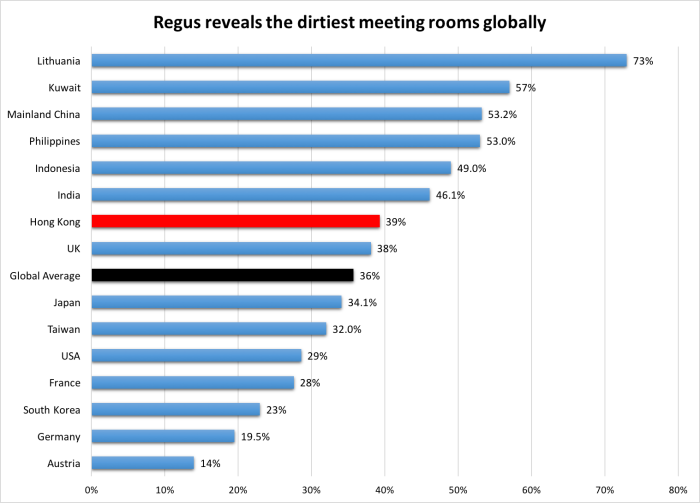 Respondents were understandably fussy about their working locations, saying that the main issue with shabby meeting spaces is the negative impression they give to clients and potential customers.

Almost a third of global workers (29%) complain that their meeting rooms look shabby to customers, and the rate of complaints is much higher in Hong Kong, with 36% of respondents agreeing to this.

Other problems regarding meeting rooms include malfunctioning projector or other meeting room facilities, which more than a third of respondents in Hong Kong (32%) complained about, while the global average is 27%.

The survey, canvassed the opinions of more than 44,000 respondents from 100 countries, including 349 business professionals in Hong Kong.

“Too many businesses underestimate the importance of conducting meetings from a professional, smart and clean environment. A home office or a meeting room littered with left over cutlery just isn’t up to scratch,” said John Wright, chief executive officer of Regus Asia-Pacific.

“Successful businesses, whether small or large, operate to a high standard at all times, and when it comes to meeting rooms this is no different,” Wright added.

A strike by Lufthansa’s ground personnel and cabin crew has resulted in around 1,800 flights being cancelled. ..

Malaysia saw the greatest decline in the online hiring of HR and admin professionals in May - a year-on-year decline of 13%...

In Malaysia, foreign knowledge worker projections must be approved before companies can apply for employment passes...

The first step to better onboarding

Here's a simple checklist to help determine the state of your current onboarding process...

The automobile giant plans to increase its headcount by 30% in 2015, including hiring new female staff for admin and engineering r..