The most in-demand jobs for Singapore’s job seekers

A total of 15,100 establishments employing 2,031,200 employees responded to the survey, where some of the key findings include:

PMET positions made up about half of the openings 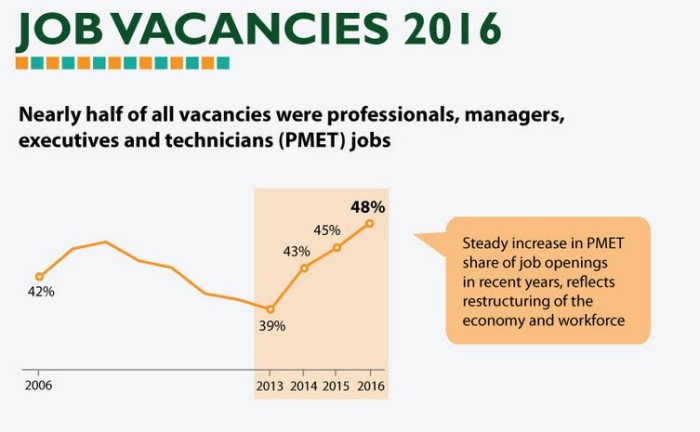 The increase in PMET vacancies was observed mainly in financial and insurance services, professional services and information and communications. On that note, the top PMET job openings in 2016 include teaching and training professionals (2,100), management executives (1,210), software, web and multimedia developers (1,150), registered and enrolled/assistant nurses (1,060).

These were also generally the top openings in recent years. In particular, vacancies for teaching and training professionals and software, web and multimedia developers have risen in the past two years (+790 or 15% p.a.). 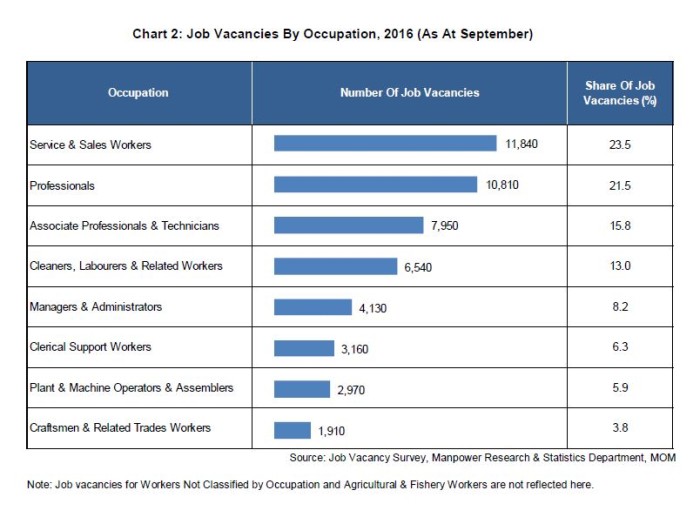 On the other hand, the highest vacancies among non-PMET occupations were for service and sales workers (11,840); such as shop sales assistants (2,720), security guards (2,280) and waiters (1,290). The report also stated a decline was observed in accommodation and food services, construction, wholesale and retail trade and manufacturing.

More job opportunities at both ends of the education spectrum

According to the report, vacancies were available to jobseekers of all educational levels with more at both ends of the education spectrum.

In fact, about only one in four of the vacancies required university degree qualifications (13,090 or 26%). This was followed closely by openings which required no/some formal education (i.e. primary and below)  at 12,880 or 26%. Additionally, secondary qualifications saw 8,320 (17%) openings while there were 9,090 (18%) openings that seek diploma and professional qualifications.

52% of non-PMET openings were unfilled for at least six months – in particular among service and sales workers – hinting that non-PMET positions are harder to fill.

For non-PMET vacancies, employers were more likely to indicate job-specific conditions pertaining to unattractive pay, long workweek (preference for shorter workweek) and shift work as the common reasons for hard-to-fill vacancies. As for PMET vacancies, it was due to lack of qualified candidates.

Based on the report, here are the occupations in demand for PMET openings: 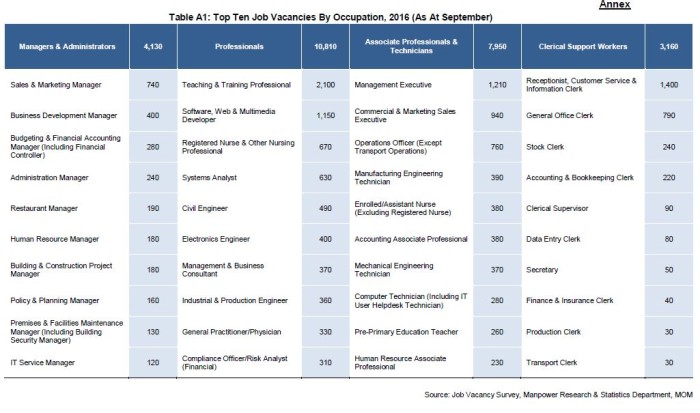 As for clerical, sales and service workers, the top occupations in demand are: 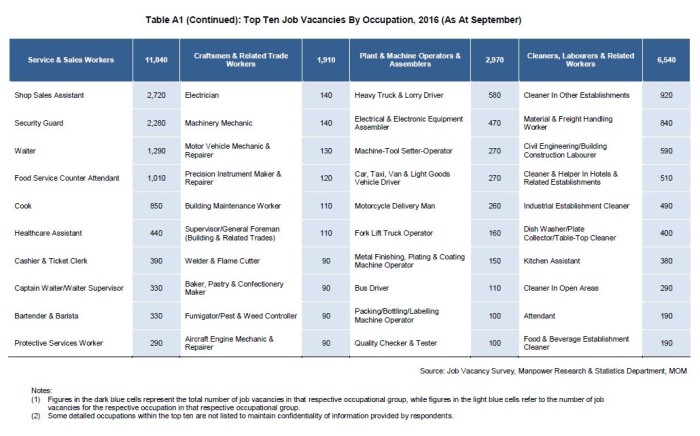 Why Singapore is not in favour of mandatory retrenchment benefits

MOM: No plans yet to introduce minimum compassionate leave in Singapore

Citybus was ordered by the labour tribunal to pay $HK60,000 to Au Tat Man who was fired for starting the bus 3 minutes late. ..

A quarter of Hong Kong workers spend up to a worrying 17 hours a day sitting down on average, a survey finds...

After CEO Christoph Mueller announced his early departure, NUFAM issued a statement accusing him of "abandoning the ship"...

How YouTube is communicating with employees during the crisis

Employees have been provided with a helpline, as Google CEO, Sundar Pichai writes, "I know a lot of you are in shock right now."..