Which country takes the longest to hire candidates?

Here’s another reason why professionals might be unhappy with recruiting processes in firms today.

According to research from Glassdoor, it is now taking longer to get though the job interview process as compared to the past.

Reviewing more than 4,250 interview reviews spanning six countries, the report found the average time taken in an interview process has risen by 3.3-3.7 days since 2009.

It highlighted the average overall job interview process takes 22.9 days in the U.S.

Jobs in France, Germany and the United Kingdom, however, were found to each take on average four to nine days longer than in the United States and Canada. 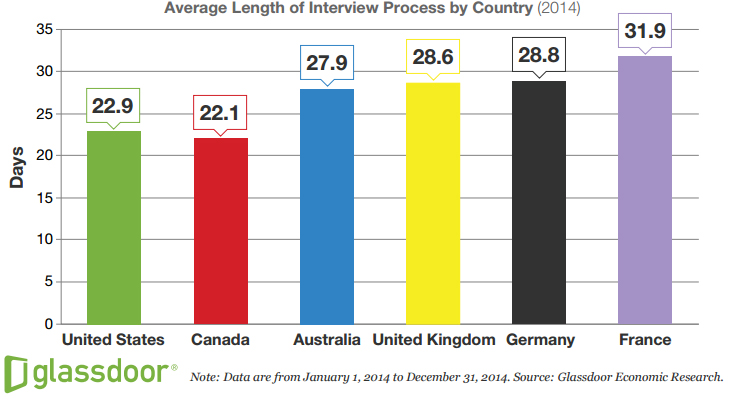 “According to academic research, part of the explanation for differences in hiring times across countries is due to differences in how efficiently labor markets match up employers and workers,” the report stated.

It explained labour markets in some countries simply do a better job at matching job seekers and companies. This partly reflects differences in labor market regulations, culture and other institutions such as rates of unionisation.

For all these countries, the report added there has been a striking upward trend in time required for job interview processes in recent years.

Various factors were attributed to this rise. These included the fact that candidates today are generally facing more “job screening” methods than in the past.

The report added job titles were also found as playing an integral role in determining time taken to hire candidates.

In general, the more complex the job, the more intense screening of applicants it required.

“All of the recent growth in hiring processes appears to be driven entirely by economy-wide shifts in the composition of employers, job titles, hiring industries, and company HR policies,” the report stated.

Hong Kong the most expensive city for expats in APAC

The Futurist: Hong Kong is not immune to #MeToo

Ten must know steps for employers in the age of #MeToo and #TimesUp...

How to: Deal with different personalities at the workplace

In this exclusive, 7 leaders share with us practical tips on speaking the same language as your diverse team members...

Investigations revealed that he had worked with another individual to obtain work passes for foreign workers with no intention in ..

Why directors in Malaysia are quitting their jobs

When it comes to a new job, more than half of senior managers are aiming for a more regional job role (53%). How can you retain th..