Singapore has the seventh highest expatriate pay packages in Asia Pacific, thanks to expensive elements such as housing and education grants.

According to a survey by ECA International, the typical total expatriate package for middle managers in Singapore is US$259,000 – higher than last year.

The survey, which analysed 320 companies in total, looked at pay levels for expatriates around the world, including information on benefits, allowances, salary calculation methods and tax treatment.

“The cost of providing certain benefits such as housing and education is the most expensive element of the pay package when relocating staff to Singapore. Remove these and Singapore falls from 7th to 14th in the regional ranking thanks, too, to low tax rates,” said Lee Quane, regional director – Asia, ECA International.

Expatriate packages in Singapore were, however still lower than in Hong Kong, which was ranked 5th in the survey.

ALSO READ: Singapore is best destination in Asia for expatriates

Japan was identified as home to Asia’s highest expatriate packages. On average, a package for an expatriate middle manager there was worth US$375,000.

Countries such as Australia, China and India followed respectively. Malaysia was the second lowest expatriate packages in the list – one spot below Thailand. 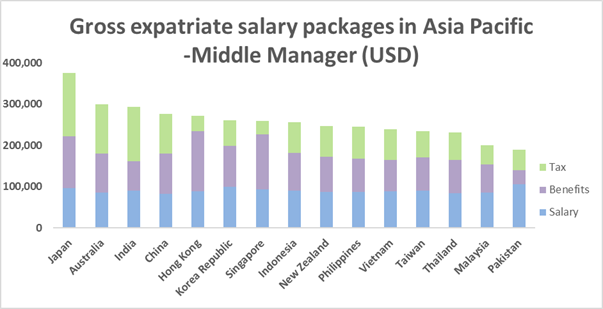 46-year-old Yuan Shungao threatened some workers that their work passes would not be renewed if they did not pay...

Businesses in APAC highly positive about 2013

Nearly all business leaders in the APAC region have a higher level of optimism about 2013 than their global counterparts. ..

These concerns - and a looming global economic instability - should be addressed in Singapore's 2015 Budget, a new report states. ..

The perfect salary for happiness? US$75,000 per annum

Beyond the magical $75k, further increases in income no longer improve employees’ ability to do what matters most to them...