CEO tells customer to **** off

The CEO of an online app who told a customer to “f*** off” in an email was berated via social media after the customer posted the email online.

Erin Boudreau had emailed the customer service team from the app, called Postmates, to complain about a delivery.

The email went around the company, eventually finding its way into CEO Bastian Lehmann’s inbox, where he added: “Someone also please tell her to f*** off”. Unfortunately, that email found its way back to Boudreau, ValleyWag reported. 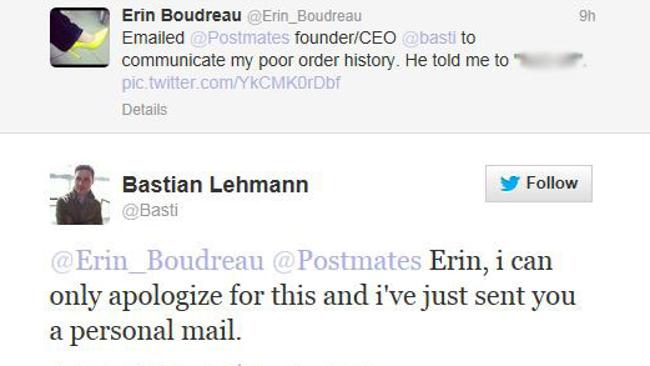 After posting it online, Lehmann wrote an apology.

“My e-mail, which outlined how to resolve the customer issue, contained a bad joke which was very poor in taste. Subsequently, the bad joke was sent to the customer. What I said was a major lapse in judgment on my part. I deeply regret this,” he wrote, while also post a string of apology tweets.

Boudreau said she accepted the apology, but she didn’t believe it was a joke.

That said, don't forget to include a personal touch as candidates still place high importance on human interaction and in-person i..

Penalties include four, tighter conditions to lift a Stop-Work Order; as well as immediate placement into a surveillance programme..

Based in Singapore, she reports in to Jeffrey Seah, country chair VivaKi and CEO of Starcom Mediavest Group Southeast Asia...

Randy Duax takes on the role as Jean-Michel Wu exits...