Career development is the hottest form of alternative reward in 2016

Operating on a tight budget, HR needs to think out of the box to make employees feel that they are valued and appreciated.

In order to retain and engage talent, companies are prioritising career development more than other alternative rewards, benefits and bonuses, according to the Korn Ferry Hay Group Alternative Employee Rewards study.

The US based study, analysed data from 242 U.S. medium- to large-size organisations, primarily from the HR function.

2. Career development programmes are highly valued across all levels

Over the next year, more than two-thirds of respondents (69%) plan to expand their use of alternative rewards at the manager/professional level and below, while the rate is slightly lower for executives, at 53%.

Across all employee levels, career development programs are poised to see the biggest expansion in use during 2016. More than half of respondents indicate they intend to expand the use of career development programs across all employee levels, supporting the creation of a stronger bench of employees with the hard and soft skills needed to assume more challenging roles within organisations.

“Even within the upper echelons, career—and leadership—development opportunities are critical to developing the competencies that can help elevate employees to the C-suite or prepare them to take on new functional roles,” said Tom McMullen, rewards practice leader at Hay Group.

After career development opportunities, spot cash bonuses are poised to see growing usage in many organisations for functional roles below executive levels, increasing at more than 46% of companies, across both manager/professional and clerical/skilled trade employee levels.

These programmes have grown in prevalence as organisations look to better align their strategic business objectives with employee recognition.

“When it comes to rewards strategies, cash is still king, though the use of financial and non-financial recognition awards is growing,” McMullen explained.

“Cash rewards don’t need to come in the form of traditional base salary increases or incentives. Peer-recognised cash awards for ‘caught in the moment’ actions and results by employees are being increasingly offered in response to successful achievement of targeted objectives, such as collaboration, innovation, customer or operational impact.”

On the executive side, much more so than in other employee groups, workers are likely to see expansion and enhancement of capital accumulation, retirement and deferred compensation programs in the next year.

4. Alternative rewards are here to stay

A significant majority of survey respondents (73%) agree that the importance of alternative approaches to employee rewards will only increase over the next three to five years, while only 2% believe they will decrease in importance.

The survey showed that leaders recognise the growing importance of a total rewards strategy—going much further than base salary, cash incentives and traditional benefits, to take into account everything of perceived value that the organization offers its employees—to help attract, engage and, particularly, retain talent in an increasingly competitive marketplace. 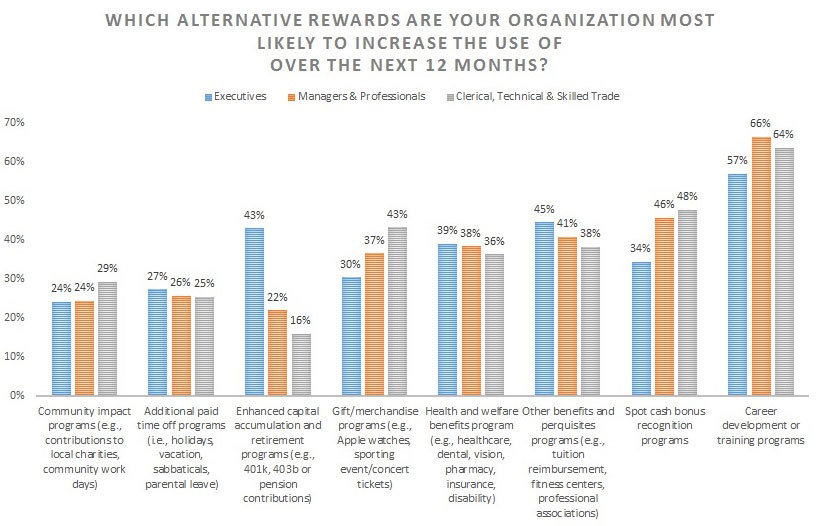 A majority of employees will be retained in the new Cargo Division, while some will be transferred to other SIA divisions...

Singapore is Asia’s number one in pension systems

Opening up the CPF to non-residents is one way that Singapore can catch up to global number one, Denmark...

The most and least productive sectors in Singapore

While productivity in the manufacturing sector increased by 4.6%, the business services sector saw a 2.7% drop in productivity...