Penning your resignation letter in icing on top of a cake has got to be the sweetest way to resign.

Airport worker Chris Holmes handed in his resignation at Stansted Airport earlier this week by piping his reasons for leaving atop a “spiced carrot cake with pecans sultanas and coconut”, The Guardian reported.

Using royal white icing, Holmes, who worked as an immigration officer with Border Force, told his employers he had decided to leave his job to work full-time at his newly-created cake business, Mr Cake.

“The writing was quite fiddly,” he told The Guardian. “I would have done it a bit neater if I’d known it was going to go viral.” 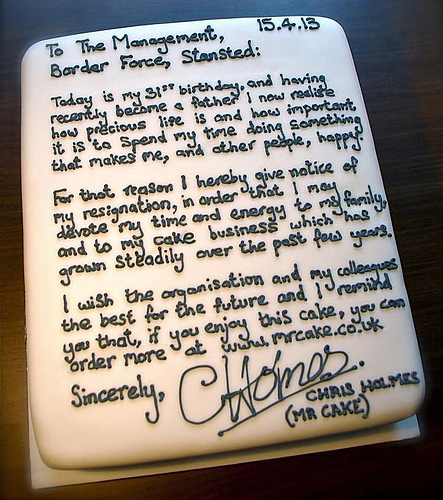 Addressing his letter “To The Management”, Holmes wrote:

“Having recently become a father I now realise how precious life is and how important it is to spend my time doing something that makes me, and other people, happy. For that reason, I hereby give notice of my resignation, in order that I may devote my time and energy to my family, and my cake business.”

Holmes said he handed the cake over to the duty manager, who was “surprised and amazed” but his managers took his resignation “very well”.

Toby Allanson, a spokesman for the Border Force, said “the people who tasted it [the cake] say it was very nice”.

How much is your CEO worth?

Firms in Singapore are struggling to find suitable female directors

Does the country really lack talented women or are companies identifying candidates for their boards in the wrong way?..

Even with business optimism at its highest level in three years, SMEs are not confident about increasing staff strength this year...

75% of Hong Kongers are frustrated with their candidate experience

Lack of information and long waiting times are discouraging professionals in the city to apply for jobs...

Is being assertive at work harmful for your career?

Being assertive is a valuable trait - especially if you're a boss, but it could also cause your perceived worth to fall by US$15,0..