The best MBA programmes in the world

The National University of Singapore (NUS) Business School’s Master of Business Administration (The NUS MBA) programme is now the 31st best MBA programme in the world.

According to the Financial Times’ (FT) Global MBA Ranking 2015, NUS’ MBA programme climbed up a position to emerge once again as the highest-ranked MBA programme offered by a Singaporean university.

The ranking was based on surveys of the business schools and their graduates of 2011. MBA programmes were assessed according to various factors, including the career progression of alumni, and the diversity of students and faculty.

Harvard Business School led the list as the university with the world’s best MBA programme. Institutions such as the London Business School and the Wharton School of the University of Pennsylvania came second and third respectively. Stanford Graduate School of Business, second last year, slipped to fourth place, along with INSEAD.

The FT found the alumni of the NUS MBA programme commanded a 127% increase in their average annual salaries post-MBA, the highest jump among MBA alumni of business schools in Singapore.

Almost all (98%) of the NUS MBA’s alumni also reported they got employed within three months of graduation, indicating that the global and local demand for NUS MBA’s graduates remains strong.

“Going forward, and in line with our vision to be the leading business school in Asia, we will strive to scale greater heights.” 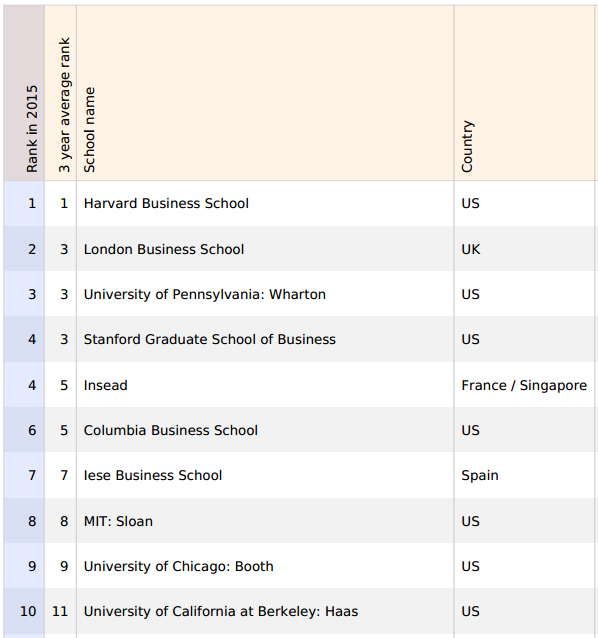 MBA salaries to increase in 2014

Bosch's SEA president discusses the war on talent and how "it's never easy dealing with the exit of high calibre talent."..

Cities such as Kuala Lumpur and Ho Chi Minh are "unlikely" to head for a global city status, new research suggests...

Beating the demons of distraction

With emails and chatty staff, the office can seem hell bent on not letting you work. Here's how to beat demons of distraction...

These triggers of stress at work are literally killing you

Unemployment and layoffs are factors that exert the biggest influence on employees' life expectancy today, followed by low job con..

Century-long study aims to understand “how we work”

Sometimes, even Google needs to search for answers. The tech giant has plans to conduct a 100-year-long survey to better appreciat..