Leadership development continues to be a key issue for bosses in the region, as corporate landscapes get more competitive and bring forth new sets of challenges everyday.

In fact, the ASEAN findings from PricewaterhouseCoopers’ 19th annual global CEO survey 2016 highlighted the top talent priority for regional CEOs this year is to enhance their supply of future leaders.

Canvassing responses of CEOs from Cambodia, Indonesia, Malaysia, Philippines, Singapore, Thailand and Vietnam, the survey found 43% of ASEAN CEOs are make changes around building a pipeline of leaders for tomorrow.

“As companies look to meet the complicated expectations of stakeholders and society, they will need a new generation of people with an entrepreneurial mindset who can harness technology and drive innovation,” the survey stated.

Here are the top five aspects of talent management ASEAN CEOs are changing in order to maximise their talent attraction and retention strategies (global figures in italicised brackets for comparison):

1. The majority of ASEAN CEOs, (43%) stated they would make changes around building a pipeline of leaders for tomorrow (49%).

2. Similarly, 43% also stated they would make changes around workplace culture and behaviours (41%).

3. Almost four of 10 respondents (39%) stated they would make changes around effective performance management (38%).

ALSO READ: 1 in 10 bosses in Asia might eliminate performance ratings

4. On par with that figure, 39% also stated they would make changes around pay, incentives and benefits provided to employees (33%).

5. Lastly, 32% stated they would make changes around their focus on skills and adaptability in their employees (30%). 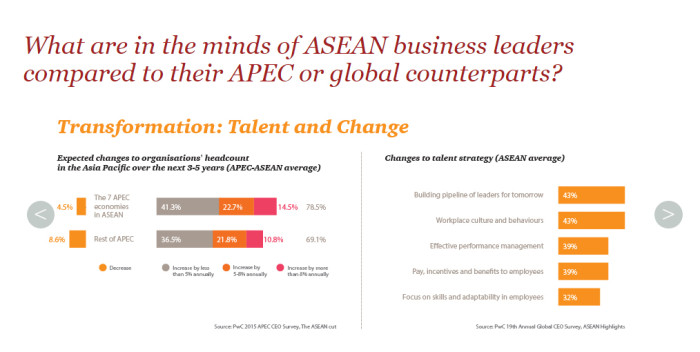 Confidence levels in their company’s growth in the next 12 months were, however, lower this year (38%), as compared to last year (47%).

In addition, 80% of ASEAN CEOs also believed there are more threats to the growth of their company today than three years ago – 14% higher than the global average.

Despite this, 59% said expect to increase headcount in the next 12 months, with 12% planning to cut their workforce.

Comparatively, 48% of global bosses are planning to expand their teams this year, with 21% saying they will trim their corporate directories.

“It’s no wonder, then, that 72% of (global) CEOs are concerned about the availability of key skills, particularly with 48% planning to increase headcount in the coming year,” the survey stated.

“And it explains why by far the most CEOs (75%) say that a skilled, educated and adaptable workforce should be a priority for business in the country where they’re based. This is such a vital factor that CEOs see it as a top priority for both business and government – together.”

In line with that trend, Brian Moynihan, chief executive officer at Bank of America Corporation acknowledged the importance of people to businesses: “Even with all the new technology, people skills are actually more important now. Whether it’s providing day-today services in our bank branches or managing our data analytics: it’s all about people.”

HSBC’s Stuart Gulliver voted the most hated CEO in banking

Candidates unwilling to spend more than 20 minutes on job application

Even if you don't have a university degree, there are a number of well-paying jobs around the world available to those keen to und..

Avoid these 3 errors in your digital learning strategy

Digital learning is not as a simple as converting classroom content into an online course - it must be easy and fun to use...

The redundancies are part of its new strategy to streamline services. However, it will not cut any of its seven channels...

A steady hiring outlook is expected in the 2nd half of 2015, with firms in the ICT and healthcare sector set to recruit the most...

Insights and advice from HR leaders at some of Asia's biggest employers, in this special edition of our newsletter...