Are you paying too much as an expat in Singapore?

Mercer has released its 24th annual Cost of Living survey, which showed that  Singapore has moved up one place from last year, as the fourth most expensive city for expatriate assignments, followed closely with other Asian cities such as Seoul (5th), Shanghai (7th), and Beijing (9th). 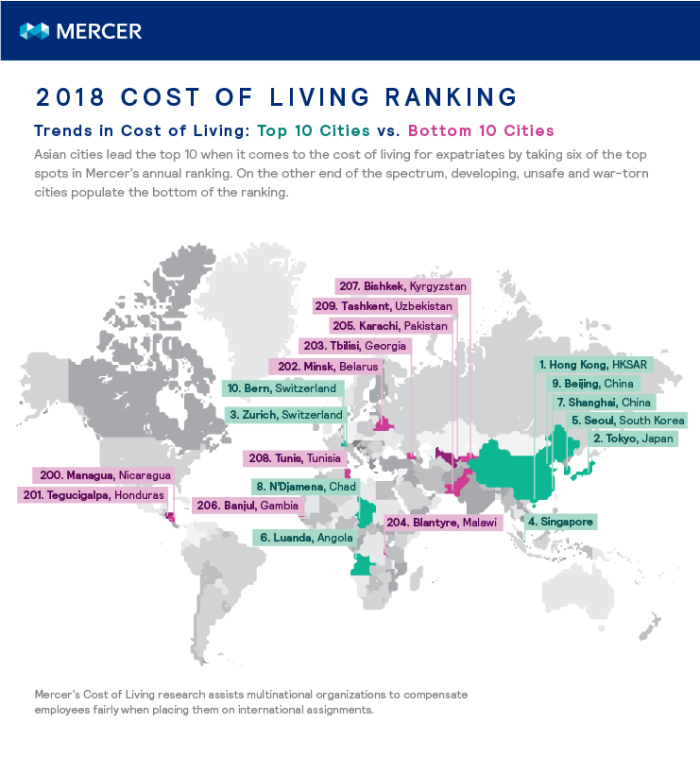 On that note, here are the top 10 most expensive cities for expatriates:

“Across the board, currency fluctuations and inflation for goods and services drive up the cost of living in Asian cities. While Singapore has climbed up one notch in the cost of living rankings from the last year, this is balanced off with high salaries and a stable economy,”said Mario Ferraro, Mercer’s global mobility practice leader – Asia, Middle East, Africa and Turkey.

“With technology advances and the importance of a globally connected workforce, deploying talent remains a key component of a multinational’s business strategy,” said Ilya Bonic, president of Mercer’s Career business.

“While a mobile workforce allows organizations to achieve greater efficiency, utilize top talent, and be cost effective with international projects, volatile markets and slowing economic growth in many parts of the world require them to carefully assess expatriate remuneration packages.”

For Asia Pacific, Hong Kong emerged as the most expensive city for expatriates both in Asia and globally as a consequence of Luanda’s drop in the ranking due to the weakening of its local currency. The global financial center is followed by Tokyo, Singapore, Seoul, Shanghai, and Beijing.

Slagin Parakatil, principal at Mercer with the responsibility for compiling the survey ranking said, “The strengthening of the Chinese yuan pushed Chinese cities up in the ranking, however, most cities in Japan fell in the ranking due to the weakening of the Japanese yen against the US dollar.”

New York City is used as the base city for all comparisons and currency movements are measured against the US dollar. The survey includes over 375 cities throughout the world and measures the comparative cost of more than 200 items in each location, including housing, transportation, food, clothing, household goods, and entertainment.

Up the ranks: Rohit Kumar is talent director - Asia at General Mills

Are you an authentic HR leader?

The next generation’s dream jobs revealed

The next Gordon Ramsey or Jamie Oliver could come from our shores, as Singaporean children choose being a chef as their dream prof..

Hong Kong is the world’s most competitive economy

With low taxes and lack of capital flow restrictions, the city was lauded for its business efficiency and economic performance...

Is employer branding suffering from an “identity crisis”?

Nobody can agree how to measure employer branding, how to execute it, and who is responsible for it, finds a new study...

Alibaba, Tencent and Baidu under fire for “men-only” job ads

Impacted pages have been shut down and all users' passwords have been deactivated...