86% of Malaysians spend at least 6 hours sitting at desks

It’s no surprise that one in three Malaysians are overweight since a majority of Malaysia’s workforce lead largely sedentary lifestyles.

According to Herbalife’s Nutrition At Work survey polling 5,500 full-time workers across the Asia Pacific region, 86% of Malaysia’s workforce lead largely sedentary lifestyles – putting them at risk of obesity.

The survey found that nine out of 10 Malaysian workers (86%) spend at least six hours a day sitting at their desk. At the same time, 86% of the workforce exercise less than three times a week.

To make things worse, about 70% of workers get less than 30 minutes of physical activity a day at their workplace.

Furthermore, some of them don’t even get away from their desks to get lunch – with five out of 10 workers admitting to eating lunch at their work desk.

“This suggests a significantly worrying trend locally, further amplifying the recent survey results in which Malaysia was dubbed as the fattest,” the report wrote.

Breaking down the results into gender, the survey found that local females are more likely to spend more time at their desks than local makes.

Almost seven in 10 (67%) of Malaysian females revealed that they spend between 6-9 hours behind the desks daily, compared to 64% of their male counterparts who said they spend the similar amount of time at their desks daily.

ALSO READ: It might soon be illegal to call your co-workers fat

It found that by generation, Millennials led a more sedentary lifestyle as compared to non-Millennials.

The survey revealed that 70% of Millennials are likely to spend between 6-9 hours at their desks daily as opposed to 64% of non- millennials.

Additionally, 52% of Millennials are likely to eat at their desks between 2-5 days in a week compared to 45% of non-millennials.

Interestingly, 66% of Millennials revealed that they would be more encouraged to stay active if it was embedded into their company culture.

“The way we live and work has seen a dramatic change due to the influence of technology. The survey reaffirms this, in which a majority of Malaysia’s workforce lead a predominantly sedentary lifestyle,” said Sridhar Rajagopalan, sub-regional general manager of Herbalife Malaysia and Singapore.

“It is possible to work towards a fitter and healthier Malaysia, whether it’s inculcating positive nutrition or simply incorporating some form of activity into daily life,” he added. 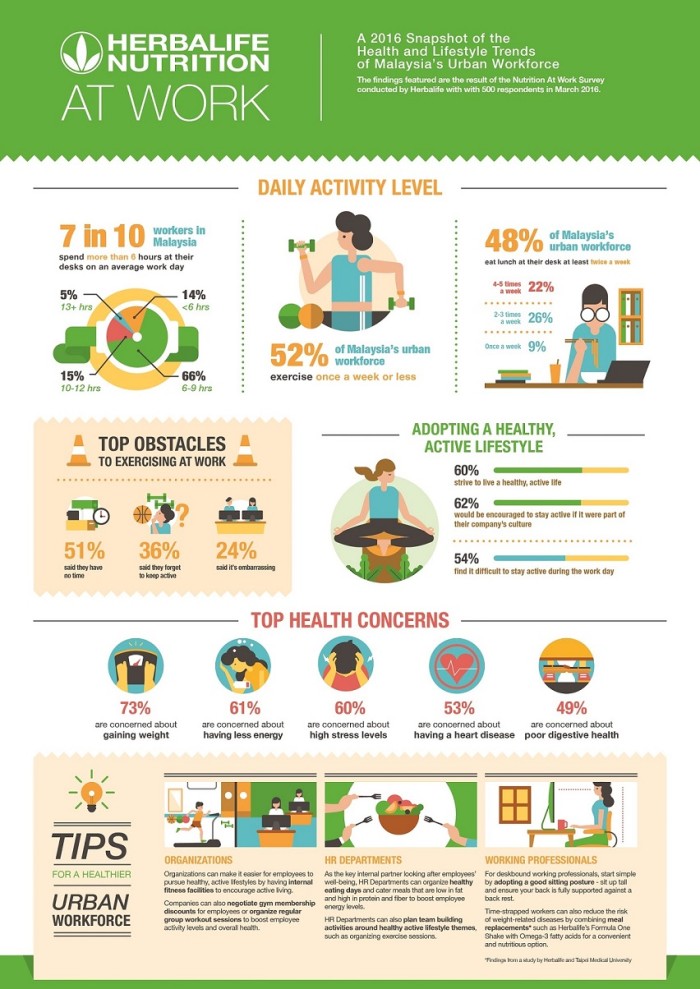 S$516mn recovered in CPF arrears to benefit 360,000 employees in Singapore

The skills that graduate recruiters want most (and can’t find)

Communication skills is the most wanted by recruiters across industries, while risk taking and entrepreneurship aren't priorities...

Shell Malaysia to cut 1,300 jobs as part of upstream transformation

We speak to Shell for details on how staff to be laid off will be identified, and the assistance provided to those made redundant...

1,200 more SMRT staff will be on the ground to support commuters, with increased signage and bus shuttles provided. ..

The firm's APAC head of HR explains how the new office helps staff socialise, brainstorm and collaborate to help them be creative...

In her expanded role, Lau is working on the development of a persona-based curriculum blending business and leadership skills...