6 lessons from The Wolf of Wall Street

Ask anyone who has read the book or seen the movie The Wolf of Wall Street what they think about Jordan Belfort, and you will probably get a few different opinions.

There’s no doubt the man had no moral compass. At the height of his success, he was addicted to about eight different drugs, sex, and lying. He made his money through illegal means, cheated on both his wives repeatedly and was, by all accounts, a pretty rubbish father to his children.

However, there is also no doubt Belfort was smart. He reached his goals, made buckets of money and inspired numerous people along the way.

I’m definitely not saying we need to go out there acting like the Belforts of our industries, but a little bit of guidance from these business lessons the book and movie taught us can’t hurt.

1. You need to work your way to the top

Putting aside the fact Belfort may not have had the best methods to get to the top, he did recognise very early on in his career that he could not sit around waiting for opportunities to come to him.

He might have been obsessed with wealth to an unhealthy extreme, but Belfort did what we all aspire to do – he used his passion for success to break boundaries and go out on his own.

Jordan Belfort: I started my own firm out of an abandoned auto body shop.

Belfort [to staff]: We will be targeting the wealthiest 1% of Americans. With this script, I’m gonna teach each and every one of you to be the best.

2. Your team is the most important thing

There are a number of scenes in the movie where Belfort stands in front of his employees in the Stratton Oakmont offices to give them riled up, highly motivational speeches. Actually, he screams at them, calls them names and picks out their weaknesses, but he also managed to inspire them and make them as hungry as he was for success.

Jordan Belfort [to staff]: Let me tell you something. There’s no nobility in poverty. I’ve been a poor man, and I’ve been a rich man. And I choose rich every f****** time.

Jordan Belfort [to staff]: This is the greatest company in the world! 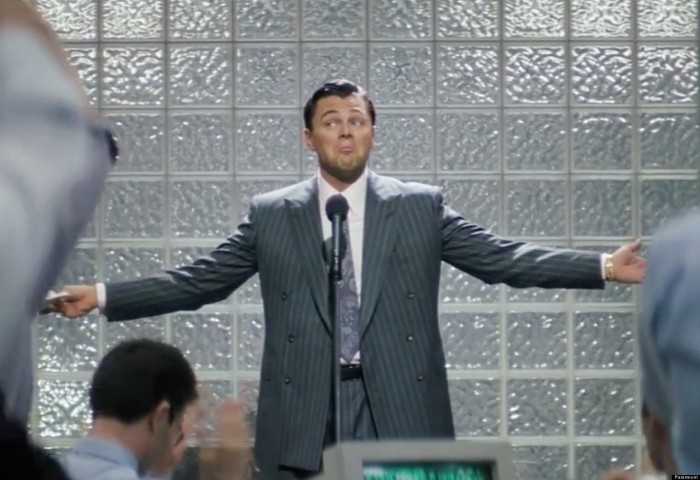 3. “Don’t hang up until the customer dies or buys”

“No” was never an option for Belfort. To him, the pitch is more important than the product (always) and a good salesman – whatever you might be selling – will never lose as long as the customer believes in you. If they don’t believe in you, they won’t give a damn about what you’re selling.

Belfort: Sell me this pen.
Brad: Okay, write your name down on that napkin.
Belfort: I can’t, I don’t have a pen.
Brad: Exactly, supply and demand.

4. When the money is gone, most of your friends will be too

Reality check: Wealth is fantastic, but when the party is over you will be left alone and broke, with only the memories of your former life to keep you going. Martin Scorsese, who directed the movie, is quite clear with his intentions for this production – if you’re going to do something big, don’t do it just for the money.

Max Belfort: $26,000 for one dinner!!
Jordan Belfort: Dad, we’re not poor anymore!
Max: Someday, the chickens are going to come home to roost.

In the movie, Donnie Azoff is Belfort’s number two, played by Jonah Hill. He is crazy (like, full blown loopy) but he admires and respects Belfort and would do anything to help him… probably because it’s making him rich, too, but that’s besides the point.

The power of having someone truly in your corner from day one cannot be underestimated.

[Later, on the phone] 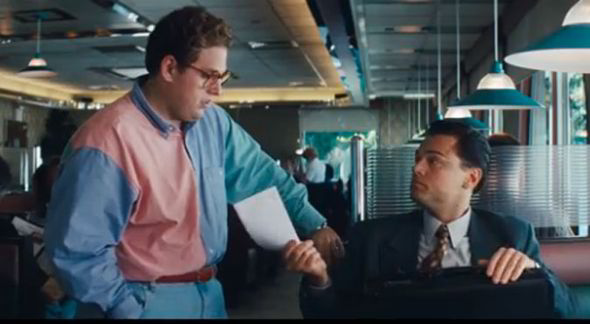 6. Stop telling yourself you can’t do it

Belfort absolutely hates being told he can’t do something. People told him in his first job he was “pond scum” and it just made him hungrier for success – to prove people wrong.

He achieved this by not feeling sorry for himself, by realising where he stood in the food chain and by telling himself the truth – that hard work and persistence was the only way he’d reach his goals.

Jordan Belfort: The only thing standing between you and your goal is the bullshit story you keep telling yourself as to why you can’t achieve it.

The high impact of diversity

The tech company believes in getting out of the everyday mundane and immersing in a new environment to stimulate new ideas...

Malaysian Cocoa Board to rehire 279 of its employees

Apart from 93 staff who will resume duties mid-August, a remaining 186 will be rehired for projects under the 11th Malaysia Plan...

The $30 million SkillsFuture Jubilee Fund aims to help build a skilled, career-resilient workforce for the future. ..