Reflecting the subdued external economic environment, the continued restructuring of the economy, Singapore has seen a bleak first half of 2016 where the labour market is concerned, with an upward trend in redundancies and slow employment growth. This was according to the Ministry of Manpower’s (MOM) latest statement on labour market developments.

Here’s a quick overview of Singapore’s labour market in H1 2016.

The statement pointed out that amid subdued global economic conditions, the decline in vacancies was broad-based across many sectors and occupation groups. Coupled with the increase in job seekers, the seasonally-adjusted ratio of job vacancies to unemployed persons declined to 0.93, the lowest since March 2010 (0.87).

ALSO READ: Layoffs, unemployment on the rise in Singapore Q2 2016 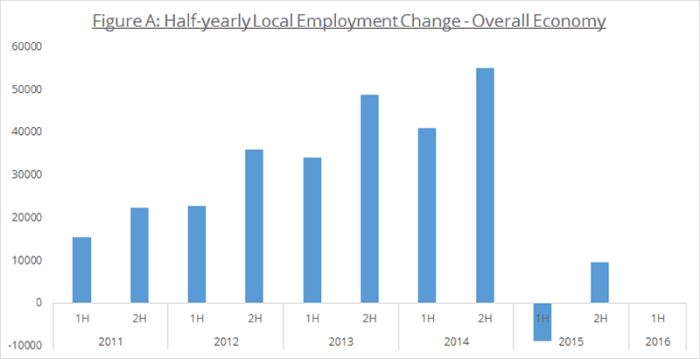 The statement attributed the slower local employment growth to singe 2015 to both structural factors and cyclical effects.

The statement noted that most of the foreign employment growth in 1H 2016 were of Work Permit holders (9,300), notably in F&B services, and administrative and support services. A significant number were employed as cleaners, security guards and kitchen assistants.

“The growth of WPH corresponded to a net shift in local workers away from lower-paying jobs, as the bulk of retiring workers had a lower education profile compared to younger cohorts entering the workforce.”

READ MORE: The sectors in Singapore most likely to hire in Q2 2016

The manufacturing and construction sectors saw productivity growth of 4.0% and 1.5% respectively.

Within the services sector, wholesale and retail trade saw the highest productivity growth (3.3%) while business services (-2.7%), other services (-2.0%), and information and communications (-1.5%) saw the steepest drops in productivity.

ALSO READ: The most and least productive sectors in Singapore

On a whole, barring unexpected shocks in the external economy, MOM expects labour demand to remain modest in 2016, noted the statement.

In line with the weaker global growth outlook, hiring is expected to be cautious in the manufacturing sector, as well as other externally-oriented services sectors such as financial and insurance Services, and wholesale trade.

Amid the slowdown in the global economy, MOM expects redundancies to continue to rise in sectors facing weak external demand and that are undergoing restructuring. On the other hand, labour supply will remain tight in domestically-oriented services sectors such as community, social and personal services and accommodation and food services.

Looking ahead, “the Government will continue to step up efforts with tripartite partners to transform our industries, create more jobs of better quality, and help displaced workers to seize new job opportunities through various career and employment support programmes under SkillsFuture and Adapt and Grow initiatives.”

Action against employers with illegal foreign workers in Malaysia

The biggest areas of opportunity for employee mobility teams

Global mobility teams are currently managing at least one million business travellers - here's how they can make a deeper business..

Here’s why you should invest in a nice coffee machine

A recent study found that for each two additional cups of coffee per day, there was a 22% lower risk of all-cause mortality...

With its operations becoming more manpower-lean in recent times, Panasonic's local workers have been retrained to work alongside r..

Would you wear gym gear to work?

The introduction of Casual Friday changed our idea of acceptable office attire. Could 'Workout Wednesdays' or 'Fitness Fridays' do..