The 25 most overpaid CEOs

The issue of determining CEO salaries has always been a sensitive one – with the man on the street commonly assuming they are overpaid in comparison to the average worker.

But is this always the case?

The Rock Center for Corporate Governance at Stanford University did a survey on  perception of pay levels for top executives. Without much surprise, up to 74% of Americans believe that CEOs are not paid the correct amount relative to the average worker, only 16% believe that they are.

“While we find that members of the public are not particularly knowledgeable about how much CEOs actually make in annual pay, there is a general sense of outrage fueled in part by the political environment,” writes David F. Larcker, a professor at the Stanford Graduate School of Business, author of the survey.

One might argue that in capitalism, the top dogs should be getting the top bucks, only that it is not the case according to a report on “The 100 Most Overpaid CEOs” released by As You Sow, a California-based non-profit that advocates for corporate social responsibility.

ALSO READ: Why CEOs should not be blamed for income inequality

“CEO pay grew an astounding 997% over the past 36 years, greatly outpacing the growth in the cost of living, the productivity of the economy, and the stock market, disproving the claim that the growth in CEO pay reflects the ‘performance’ of the company, the value of its stock, or the ability of the CEO to do anything but disproportionately raise the amount of his pay,” writes Rosanna Landis Weaver, the lead author of the report.

A regression analysis which rates investments by factoring in environmental, social and governance factors, found 17 CEOs who made at least $20 million more in 2014 than they would have if their pay had been tied to performance.

Take David Zaslav, head of Discovery Communications who topped at list of “The 100 most overpaid CEO” as an example.  Zaslav earned $156.1 million in 2014, he made made $142 million more than would have been warranted if his pay was more directly linked to performance according to the analysis conducted.

The report concludes: “CEO compensation as it is currently structured does not work: Rather than incentivise sustainable growth it increases disproportionately by every measure, and receives no consequences. Too often, it rewards deals above development and risk rather than return on invested capital.”

It added that the good news is, however, as Weaver sees it, is that excessive CEO pay can be reined in before it spirals even higher .

But corporate board members and institutional investors are still not focusing closely enough on tying pay to performance and doing what’s best for shareholders, including those who own stock through mutual funds or pension plans as pointed out by the report.

“Today, those casting the votes on the behalf of shareholders frequently do not represent the shareholders’ interests.  Now is the time for shareholders, particularly those with fiduciary responsibilities, to become more engaged in their analysis of executive pay and those who award these packages,” Weaver writes. 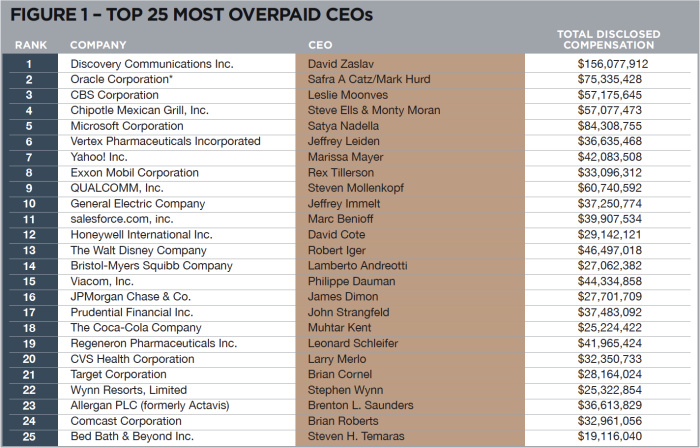 The top 4 concerns Malaysian bosses have about staff this year

In this video interview, three regional HR leaders share their secrets and advice to help you craft a better employer brand. ..

Are these the world’s 11 worst interviews of all time?

As a boss, you've got to be ready for anything while interviewing - be it a diarrhea-ridden candidate or one who swears...

Is your leadership style making your staff sick?

Inspiring transformational leadership may bring short-term results, but can also burn out employees and boost absenteeism...

The firm's regional director of talent management shares how the newly launched DAN Academy and LMS is accelerating talent potenti..